Indonesia will have to reinvent the concept of Islamic finance to compete with its rival Malaysia, whose assets dwarf those of all other Asian countries combined. Stefanie Eschenbacher talks to the central bank and other pioneers.

Bank Indonesia has ambitious plans to bring Islamic finance into the mainstream, like the transition socially responsible investment made over the past decade.

Nasirwan, deputy director of Islamic banking at Bank Indonesia, says the aim is to increase the share of Islamic finance in Indonesia up to 20% of total finace by 2020.

This is an optimistic calculation, admits Nasirwan, who, like many Indonesians, has only one name. Though he says recent developments in Indonesia are promising.

Assets in Islamic funds in Indonesia increased more than fivefold to $809.5 million from $147.8 million in 2008, data from Lipper shows.

Growth in Indonesia has outpaced that of other countries; worldwide, assets in Islamic funds have grown from $23.5 billion to $44.2 billion over the same time.

Still, Indonesia is growing from a low base. Even though it is home to the largest Muslim population in the world, its assets are nowhere near the $14 billion of assets held in Malaysia.

There is increasingly a consensus that something needs to change in the country.

“Socially responsible investment funds are based on ethics and morality, something that they share with Islamic funds,” he says.

Muljawan says because gharar – risk and uncertainty – is prohibited under sharia, it also furthers stability and real economic development. Muljawan says it should therefore be in the interest of the government to promote the concept.

Islamic finance in Indonesia started from the desire of a few to create a more stable economic and financial system after the Asian financial crisis that started in 1997, and had far-reaching political and social implications.

“There was anxiety among Indonesians and the thought of a financial system based on the values of Islam appealed to them,” he says.

“Islamic finance has not been able to shake off the perception that it is a concept exclusively for Muslims,” she says. “In reality, it is simply a financing tool.”

Farouk Abdullah Alwyni, chairman at the Centre for Islamic Studies in Finance, Economics and Development, pushes this idea further and says that Islamic funds need to “go beyond formality” to appeal to mainstream investors.

Alwyni highlights the case of US athletic shoe and apparel company Nike, which came under harsh criticism ten years ago for using child labour.

Today, Indonesia is Nike’s third-largest production operation after China and Vietnam. Last year, it had to pay $1 million to Indonesian workers for nearly 600,000 hours of overtime without pay over two years.

“Islamic finance funds should focus more on human rights and environmental issues, such as child labour and pollution,” Alwyni says, adding that while socially responsible investment funds dropped Nike ten years ago, Islamic funds did not.

Islamic finance and socially responsible investment are often similar in their objectives, investment methods and emphasis on ethics.

Socially responsible investment funds have been criticised of “greenwashing” – whereby asset managers make unsubstantiated or misleading claims about their funds – while Islamic funds have been caught up in in what industry experts refer to as the “form versus substance” debate.

They say, in other words, that too much attention is being paid on making funds sharia-compliant rather than focusing on the intentions of the underlying investments.

The contribution of Islamic finance to the financial services industry is low, but Wibisana says this may change.

Pria S. Alamsyah, an associate and colleague of Pramitaswari, says Islamic bonds, or sukuk, involve more documentation and need a fatwa – a legal judgement from the local Fatwa National Sharia Board. Investors and issuers, he says, need a “sweetener” to compensate for additional costs.

“It took years to convince the government to even issue a sukuk, but now the support from the Indonesian government is good,” he says. “Islamic finance is still in a developing stage, but we are expecting a lot of products to come out.”

Bank Muamalat Indonesia was the first to be recongised as an Islamic bank after the Asian financial crisis ended. Yet it took the Indonesian government a decade to ratify an Islamic banking act.

Muljawan says other elements of the concept of Islamic funds were also formally recognised at that time, including the prohibition of riba – interest – and gharar.

Despite recent laws intended to harmonise the tax treatment of conventional and Islamic funds uncertainty lingers. This has hampered growth.

“Bank Indonesia has issued a lot of laws, but up until 2010 there was no clarity when it came to tax treatment of Islamic products,” Pramitaswari says, adding that there has been a strong push from market players to clarify those points.

“There was a specific tax provision about Islamic transactions in 2011, but the wording is still not clear.”

Pramitaswari says corporate sukuks have not seen the same degree of success as government sukuks.

Indonesia reaped a $1.5 billion from the sales of high rate dollar-denominated Islamic bonds in September, which was more than three times oversubscribed.

Incoming bids from 300 investors – from Asia, the US and the Middle East – exceeded $5.6 billion.

Pramitaswari says Indonesia still lacks basic requirements for an efficient regulatory framework that would allow a broader range of products.

Islamic bonds differ from conventional bonds in the sense that they are asset-based – sukuk loosely translates into evidence of ownership.

COMPLETE OVERHAUL
Pramitaswari says Indonesia would need a special regulation for an international corporate sukuk to be issued because it has a civil law concept and lacks a common law concept.

“There is no concept of trust, no concept of differentiation between legal and beneficial ownership,” she says. This makes it difficult for Indonesian corporates to issue sukuk.

“The documentation involved for issuing sukuk is also a lot more than for that of a conventional bond, and, as such, the cost is a lot higher,” she adds.

The law for government sukuk allows for a trust to be formed, enabling the government to act as a special purpose vehicle. Though she says creating such a specific law for corporate sukuk would be a challenge to lawmakers.

“We would need a complete overhaul of our law if the government wants to boost sukuk, but that would be difficult,” she says.

“The problem is some policymakers do not understand Islamic finance,” Nasirwan says of his efforts to try and convince the government to help develop Islamic finance through means like tax incentives.

Ultimately, Alamsyah says, there needs to be more clarity when it comes to taxation of Islamic funds, whether they are local or cross-border.

“The push from Bank Indonesia to promote Islamic finance was strong,” he says, but adds that “there has not been a lot of support from other players” so far. 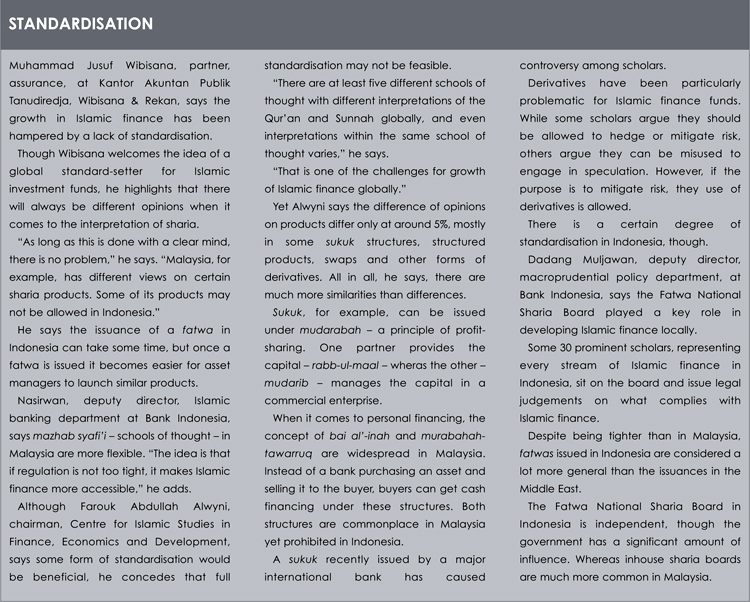 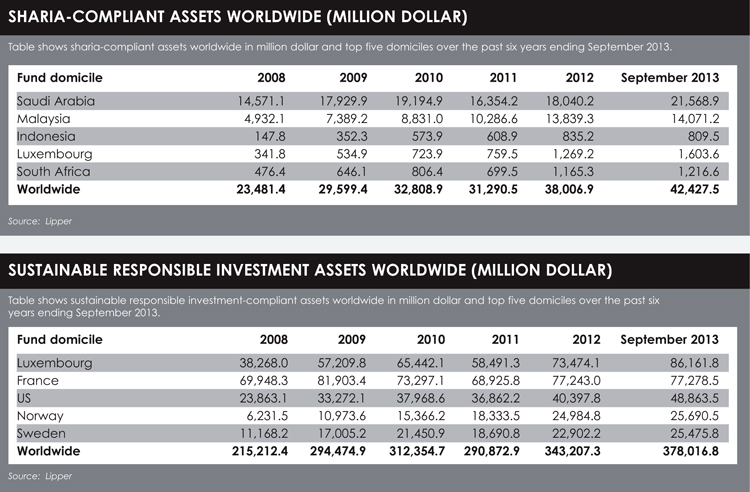