INSIDE VIEW: All about Indonesia

This year saw 68 newly launched sharia-compliant Asian funds, with the most of the funds launched focusing on the Indonesian market. Zawya Islamic â Lipper analyses the data.

The majority of sharia-compliant fund launches in Asia over the past year was focused on the Indonesian market and originating from Indonesian fund managers.

These managers launched a total of 22 funds.

This compares to 14 new funds that are focused on Malaysia, which is Indonesia’s biggest rival when it comes to Islamic finance.

It happened as government spending announced by the Indonesian government earlier this year increased, and the growth of infrastructure projects and pilgrim funds.

PROMISING
Equity funds continue to be the most launched asset class, with 25 new funds, followed by 19 sukuk – Islamic bond – funds.

For both equity and sukuk, Indonesia tops the league with the highest number of fund launches among the other countries.

With all this activity taking place, Indonesia seems to be a promising market for 2014.

It is worth mentioning that 2013 saw the highest number of fund launches in four years.

This indicates an upturn and renewed confidence for the Islamic asset management in emerging economies.

For instance, in the countries belonging to the Gulf Cooperation Council we saw more activity.

The equity United Arab Emirates sector is the second best performer, with 35%, for the same period.

The third best performers are the Saudi Arabian equity funds focused on investment in the basic industries sector, with 26% growth.

As for the top performing fund, the Kuwaiti Al Dar Money Market took pole position with a one-year return of 68%. 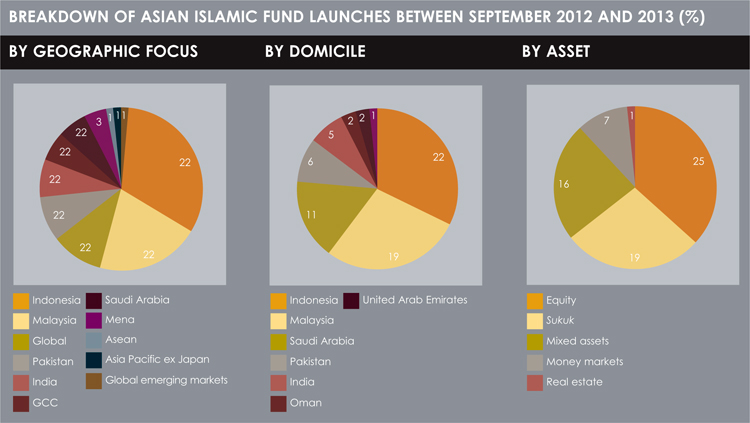