Foreign hedge funds have been playing a waiting game with China.

Plans for the much anticipated Qualified Domestic Limited Partner (QDLP) scheme – designed with hedge funds in mind – seem to be in limbo. If implemented, the QDLP could be a game-changer for the hedge fund business in Asia.

It would finally allow foreign hedge funds to raise money in China for offshore investments, and give Chinese investors access to a new asset class.

The QDLP was dubbed the “Big Bang Theory” by Shanghai-based consultancy Z-Ben Advisors in a market update published in May last year.

“The QDLP programme remains an attraction, both for offshore hedge funds and onshore investors,” says Michael McCormack, executive director at Z-Ben Advisors. “It is not just about offshore fund raising, but also a promising idea for onshore investors to diversify into a variety of asset classes that are either unavailable or restricted.”

What QDLP now needs, McCormack says, is a clear signal from the Chinese regulator when it is likely to occur so hedge fund managers, investors, distributors and promoters can prepare for it.

“It is likely that several months will pass between the here-it-comes and the today-it-starts announcements,” he adds.

Since mid-autumn last year, the Chinese government’s regulatory attention appears to have been almost entirely on Hong Kong and the various schemes involving traditional asset managers.

QDLP, as a result, may have slipped down in the order of priorities.

One expert, speaking on the condition of anonymity because he is not authorised to discuss confidential information about the pilot programme publicly, says between three and five hedge funds are to be admitted into the $3 billion or $5 billion pilot programme in which the overall quota will be equally shared, at $1 billion each.

Some six months ago, the number of hedge funds involved was thought to be five or six.

“It is going to be a small group,” the expert says, adding that 20 managers were subject to due diligence, and 18 of those were shortlisted.

Another expert, who also declined to be named, citing client privileges, says it is more likely participants have withdrawn than the Shanghai Financial Services Office
(SFO) removing them from the programme.

He says two factors might have contributed to pilot participants withdrawing: a lack of tax clarity and the risk-free rate of about 7% that domestic bank wealth management products are creating in Chinese investors’ minds.

The first was supposed to be cleared up more than a year ago, but little appears to have changed since. This means participants would not be able to guarantee investors how they will be taxed as a result.

HURDLES
Then the consensus was that the risk-free rate of about 7% was a temporary phenomenon that would stabilise, either because the wealth management product supply became exhausted, regulators cracked down on the products or “enough of them went bust”, the expert says. 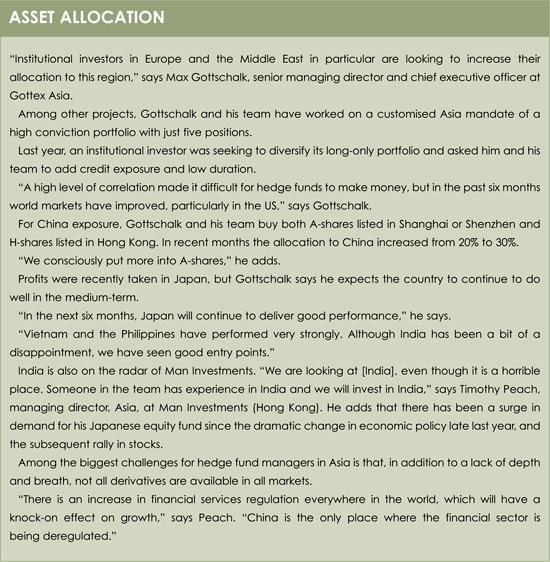 “None of those have happened, so investors continue to look for extremely high hurdle rates. If the number has shrunk, it is because of participants withdrawing, not because the SFO is removing them. I would also be surprised to see the programme launch with only three participants.”

Neither the SFO, nor the China Securities Regulatory Commission (CSRC) nor the State Administration of Foreign Exchange (SAFE), which is in charge of quota, returned Funds Global’s requests for comments.

The QFII scheme already launched more than a decade ago, allowing asset managers to raise money in China, but hedge funds are still not included.

Hedge fund managers are keeping their eyes on QFII. CSRC, the People’s Bank of China and SAFE are jointly administering QFII quotas.

Their rules govern the regime that allows qualifying foreign institutions to invest in A-shares listed in Shanghai and Shenzhen, and other renminbi-denominated securities.


Although QFII quotas have been increasing steadily, the Chinese regulators have made no indication that it will include hedge funds.

McCormack says he does not expect hedge funds to obtain QFII quotas any time soon, at least not while regulators are still occupied with the QDLP.

The CSRC has so far not approved QFII quotas for hedge funds, but there are signs that this will soon happen.

Peach says some institutional investors, such as the National Pension Service of Korea, do invest in private equity, but refrain from hedge funds as it is “politically sensitive”.

SCANDALS
Equity long/short is still the most common strategy in Asia, mainly because many of the derivatives hedge funds in the US and Europe employ are not available in Asia yet.

“One of the biggest problems we have is the negative association with the word hedge funds,” he adds.

During the 1997 Asian financial crisis many hedge funds benefited from currencies losing value, and Peach says many people still blame hedge funds. “Hedge funds profited from it, but they did not create it,” Peach says of the massive devaluation of Asian currencies. “There is a misconception that hedge fund managers force companies to fail because they go short.”

He criticises that much of the attention from the media has been focused on scandals such as Bernard Madoff’s hedge fund, a giant Ponzi pyramid selling scheme, rather than the success stories.

Bridgewater, for example, was founded in 1975 out of a two-bedroom apartment and today manages $150 billion in global investments for a wide range of institutional clients.

Based in Westport, Connecticut, Bridgewater has repeatedly been listed among the largest and best-performing hedge fund managers in the world.

Peach says even successful hedge funds have traditionally kept a low profile, which has made the sector “a suitable scapegoat for politicians”.

Despite success stories such as that of Bridgewater, hedge funds continue to make negative headlines. 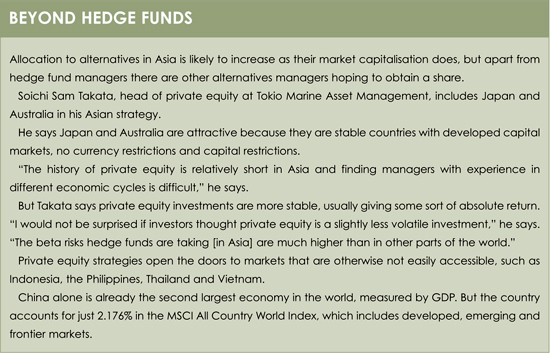 Nearly half of the respondents (46%) revealed they believe their competitors engage in illegal activity. More than one-third (35%) said they personally felt pressure to break rules and about one-third (30%) have witnessed misconduct in the work place.

“Previously, this process was not so cumbersome for investors and not so detailed for hedge fund managers,” he says, adding that up until recently most hedge fund managers did not even disclose their holdings to their own investors. “If they want to attract more money, they have to become more transparent.”

GREAT ROTATION
Peach says institutional investors are “creeping up the risk curve to get the yield they need”. As it becomes more challenging to generate attractive returns elsewhere, he says some hedge fund managers might attract new money.

He questions the concept of the great rotation, a widespread idea that falling government bond yields will lead investors to allocate to equities.

Although Man Investments has been in Asia for two decades, initially with a regional office to access client capital, over the past four to five years it has been building out investment capabilities in the region.

Between 15% and 20% of the $57 billion of assets Man Investments manages globally are in Asia. Peach says this share has increased in recent years, and is set to increase further.

“We are refocusing our capabilities,” he says. “Historically, the focus has been on private clients, which will continue, but increasingly we will also focus on institutional clients.”

“We have been developing our multi asset capabilities since 2009, and combining Gottex and Frontier will give us critical mass,” he says, adding that this furthered the expansion in Asia both in terms of investment products and asset raising.

Interest in hedge funds has picked up over the past six months so even if QDLP and QFII remain in limbo, hedge fund managers are finding other ways to grow.