IN NUMBERS: Plain vanilla no more

The share of long/short equity hedge funds in Asia has fallen as the market matures and investors increasingly seek strategies that are less correlated to underlying markets. Stefanie Eschenbacher looks at the numbers.

Equity long/short is loosing its appeal in Asia.

While the majority of Asian hedge funds still trade relatively plain vanilla positions, the market share of long/short equity funds has fallen from more than half to just over a third since 2007.

Farhan Mumtaz, head of analysis and research at Singapore-based data provider Eurekahedge, says much of this decline happened during the financial crisis. 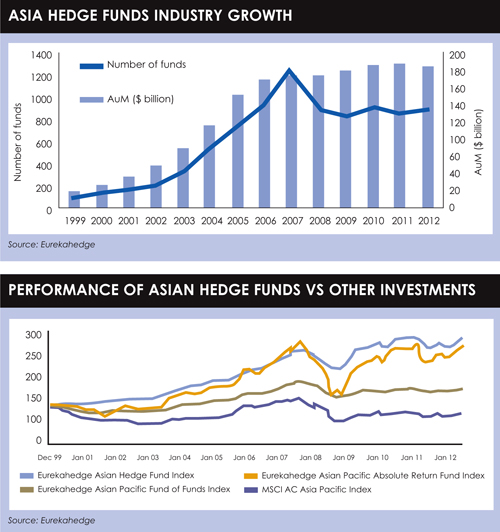 Both managers and investors increasingly seek strategies that are less correlated to underlying markets.

Equity long/short managers suffered heavier losses than other managers, but Mumtaz says their decline is characteristic of a growing and maturing market.

GEOGRAPHICS
While there is a desire to move away from traditional long/short equity, Mumtaz says it is still challenging to run certain strategies in Asia because the derivatives they need are not available.

“The most successful strategies in general have been those employed by commodity trading advisors (CTA), but few of them are focused on Asia.”

The breakdown of geographic mandates has changed significantly, too. Most notably, the share of managers with a global mandate has nearly doubled.

Globally mandated Asian hedge funds, he adds, did not suffer losses to the same extend as hedge funds focused specifically on Asia or single countries within the region.

Interest in the Greater China region has increased, where Mumtaz says managers seek out opportunities in what seems to be a vibrant and growing economy.

Hedge funds investing in Asia, including Japan, have lost the largest share, though.

Growth in the post-financial crisis years has been slow, at least compared with growth rates the industry has seen in the past.

FAILURES
In the boom years leading up to the financial crisis, the number of hedge funds in Asia had increased six-fold and total assets under management had grown by 900%.

Hedge fund assets under management are now at $1.83 trillion, almost the all-time-high of $1.9 trillion in April 2008.

A few large hedge funds are increasingly attracting assets at the expense of smaller ones. The industry in Asia is growing, even though hedge funds have always had a high failure rate.

Calculated from the data provided, Mumtaz says half of Asian hedge funds closed within the first three years. This compares with a 25% average for all Asian funds.

Exactly how many fail is hard to tell because hedge funds are self-reporting. It has often been estimated that the real failure rate is more between 60% and 80%.

Mumtaz says raising assets has become harder in general, and anecdotal evidence suggests that some funds, which previously insisted on a minimum investment of $1 million, now take in as little as $200,000.

“Investors used to attend three to five meetings and then wrote a cheque,” he says, adding that now meetings are usually set up only after a year or so of internal research and due diligence.