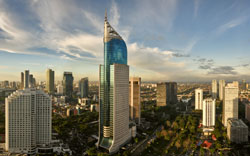 Indonesia is waking up to the promise of Islamic bonds, and with a population nearly 10 times that of Malaysia, it could soon become a regional heavyweight. Orlando Crowcroft reports.

It was not a surprise when Indonesian finance minister Bambang Brodjonegoro announced in January that the country would issue a new tranche of international sukuk in the first half of 2015. Indonesia has sold more than $5 billion in Islamic bonds over the past four years, exceeding Malaysia’s $3.25 billion by some distance.

The government of the world’s most populous Muslim nation has quickly realised how lucrative Islamic finance can be, especially for a quickly developing country. Taking office in October 2014, president Joko Widodo said infrastructure development would be a pillar of his presidency and he is aware that sukuk could help pay for it.

But it is still early days. Indonesia currently has less than 2% of global Islamic finance assets and only about 5% of its total domestic banking assets are sharia-compliant. Neighbouring Malaysia has not much more than a tenth of Indonesia’s population and yet Islamic banks there hold more than 20% of the country’s banking assets. In addition, Malaysia has been synonymous with sukuk for decades.

In November 2014, the Indonesian Financial Services Authority issued new rules for the development of Islamic finance in the country, and formal new regulations are expected in the year ahead. The change of government in October has inevitably slowed progress, but activity is picking up as 2015 unfolds.

“I think the government and the regulators are taking their time developing the industry slowly but surely. I am sure we will see moves over the next year,” says Hatim El Tahir, director and Islamic finance leader at Deloitte Middle East.

Indeed, a degree of confidence has come with the election of Widodo, who stood on a platform of infrastructure development, good governance and economic reform. Indonesia is exciting to investors for its demographics – the country is home to more than 250 million people – and its political stability, which distinguishes it, at present, from much of the Middle East.

“Once the Indonesian Islamic financial market becomes more mature, whereby issuers and investors get more familiar with Indonesian regulatory frameworks, we could expect foreign assets to be securitised as sukuk using Indonesia as a platform for issuance,” says Abas A Jalil, chief executive of Amanah Capital in Malaysia.

FOREIGN INPUT
So far, Indonesian sukuk have been issued exclusively to fund domestic infrastructure projects and, as a result, were hugely oversubscribed by local investors, institutions and funds looking to cash in on domestic growth. But the expectation is that as the regulatory environment improves, foreign investors will also get involved.

There has already been a significant amount of foreign investment in the industry as a whole, and K&L Gates’s latest report into Indonesian Islamic finance noted a number of deals, including Dubai Islamic Bank’s (DIB) acquisition of a 26.9% stake in Bank Panin Syariah. DIB has applied to boost that stake to 40%, says the report.

Indonesia successfully sold a US dollar denominated 10-year sovereign sukuk in September 2014 that was almost seven times oversubscribed, despite offering a modest yield on a $1.5 billion issuance, says K&L Gates. It is telling that 35% of the issue was set aside for investors in the US and Europe and another 35% to the Middle East – leaving just 30% for the domestic market.

“The attraction of foreign investor inflows to Indonesia is undoubtedly a driving force behind the latest proposed domestic reforms,” says Lawrence.

HURT BY OIL
As Indonesia has garnered encouraging headlines in 2014 and into 2015, Malaysia, an oil exporter, has languished. One obstacle was the oil price slide in the second half of last year, which forced the government to dip further into dwindling foreign exchange reserves. It prompted Malaysian prime minister Najib Razak to state that the country “was not in crisis” – raising fears, naturally, that the country very much was.

Those fears will undoubtedly hit the Islamic finance industry. Fitch Ratings warned it was likely to downgrade Malaysian sovereign debt in its review of the first half of 2015. Government debt has already soared to around 70% of GDP, one of the highest ratios in Asia, and the value of the ringgit continues to fall.

However, there are still reasons to favour Malaysia. Plenty of economies have to rethink their strategy in the face of falling oil prices and Malaysia, like Indonesia, is not faced with the political instability that is currently racking the Middle East. Those looking for Islamic finance markets outside of the Middle East will inevitably turn to southeast Asia, and Malaysia remains the dominant player in the Asian Islamic space.

“I can see that there are a lot of issues, but Malaysia’s fundamentals are very good. It wants to emerge as an education centre, a tourism centre. They are building very good real estate projects. Infrastructure continues to improve and regulation is one of the best, if not the best, in the world,” says El Tahir of Deloitte.

El Tahir believes Malaysia still has plenty of space for growth in Islamic finance, even though it has been an established global hub for decades. Growth areas could include retail, wholesale and corporate products as well as micro-finance for small and medium-sized enterprises. Banks are still making progress in catering to niche markets.

“There has always been an emphasis on product innovations and development of new products,” he says. “The industry continues to grow.”

WATCH THE RATINGS
When comparing the two countries, it must be remembered that Malaysia and Indonesia have very different rankings on the international markets. Ratings agency Moody’s classifies Indonesia at Baa3, three levels below Malaysia. Without significant regulatory reform, this ranking is unlikely to change. Indonesia may be the great new hope for Islamic finance, but it is still a relative upstart.

“We should not compare Indonesia with Malaysia at the same level. The market is totally different,” says Jalil of Amanah Capital.

That said, where the Malaysia market is saturated, Indonesia’s position on the cusp of developing its industry – as well as its stellar demographics – means that those in the Islamic finance space will be looking to get in early. Establishing a footprint in these heady days, as Indonesia finds its feet, could reap rewards when it almost inevitably begins to run.

According to Lawrence of K&L Gates: “Given the growth potential of the market, Islamic compliant investors will be more concerned to embed themselves in the country and grow with the Islamic finance industry.”