With pension obligations threatening to bankrupt China, the government has started reforming its social security system. Stefanie Eschenbacher finds state-owned enterprises have been asked to help with funding.

China is under pressure to reform its social security system as pension obligations threaten to bankrupt the world’s second-largest economy.

The United Nations Populations Fund predicts that 332 million Chinese, almost one in four, will be over the age of 65 by 2050.

China is not entirely transparent about the management of its pension system and estimates of its deficit ranges from 2 trillion renminbi ($322.8 billion) to 8 trillion renminbi. Either figure is lower than that of some developed countries, but China is poorer and greying faster.

Tao Wang, head of China economic research at UBS, says the pensions problem may bankrupt the country in a few decades if the system is not reformed because its parameters are not sustainable.

Those concerns have also been raised at an official level. The United Nations Development Programme, which uses a conservative estimate of the deficit, warns in its latest China National Human Development Report 2013 that “the possibility of bankruptcy exists if the current pension system is not reformed”.

China has a three-pillar system of social security, but only the pension provided and guaranteed by government is substantial. Pensions provided by employers and private pensions are not well developed, undercutting the overall scope and sustainability of the social security system.

Karine Hirn, partner and head of Asia at East Capital, says the Chinese government could actually afford long-term planning, unlike many others.

The largest enterprises are owned by the state, which has long raised the question whether their focus should be on paying dividends that could benefit ordinary Chinese, rather than on capital accumulation.

During the third plenary session last November, the government decided on far-reaching reforms to be implemented over the next decade. State-owned enterprises have to increase their dividend payout ratio by 2020 to 30% to recapitalise the social security system, and shares in these companies will be transferred to the social security fund.

POLICY-LED
About 68% of companies have paid out dividends.

Leanna Lim, vice president, equities, at Markit, adds: “As a country that is more policy-led than laissez-faire, we believe government measures in China will have a definite impact on the companies’ actions.”

Increasing the dividend ratio further will affect the ability of state-owned enterprises to expand, but Hirn says some of these enterprises “should not even exist in the first place”.

Much of China’s economic growth stems from an investment splurge; more infrastructure and factories were built even as the country was growing at double-digit rates, resulting in overcapacity.

The Development Research Center, a government think-tank, ranks overcapacity as the largest risk to economic growth in China.

“If there is one problem with state-owned enterprises, it is that they are being financed with cheap money,” Hirn says. “They are subsidised with money that is lent to them cheaply, but the Chinese economy is heading towards higher interest rates so financing becomes more difficult.”

The government recently announced the sale of a stake in a subsidiary of Sinopec, the largest oil refinery in Asia. This will be the first major sale of state assets since president Xi Jingping unveiled the reforms, signalling a trend towards privatisation. While bloated state-owned enterprises can sell their assets to help temporarily bridge the gap in the funding of the pension system, it would only be a one-off boost.

“The problem can only be solved if parameters are changed,” Wang says. “The entire pension system is not sustainable as it stands.”

How much pensioners get depends on the structure of the population in the area. Pensions in rural China are sometimes a fifth or less than in more prosperous coastal cities, widening the gap between rich and poor.

Pension payments are generous. While a monthly pension of 500 renminbi in Shanghai does not seem high in absolute terms, it is relative to salaries.

Pension benefits are also tied to the residency permits, which discourages workers to move to cities where they can find better-paying jobs.

The retirement age differs, depending on jobs and gender, and early retirement is possible.

Chinese receive pensions for more years than they work.

Wang says not only the retirement age needs to change, but also the way pensions are distributed. “After ten years, where does the money come from?”

Instead of the current pay-as-you-go system, which is essentially about managing the gap, Wang says pensions should be put into an annuity.

Wei Yao, China economist at Societe Generale, says China is going to be the country with the fastest ageing process in history and the quickest pace will occur over the next ten years.

China is at a stage of development today where Japan was 30 years ago, or where Korea was 20 years ago, but the Chinese population is greying much faster.

Implemented three decades ago, its controversial one-child policy has excabareted this. 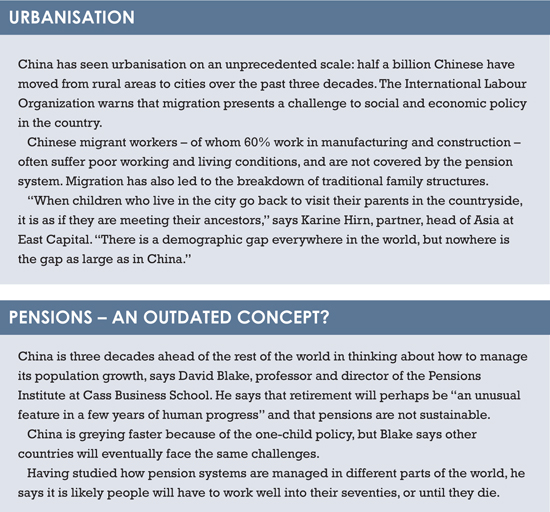 David Blake, professor and director of the Pensions Institute at Cass Business School, says women need to have 2.1 children in order to sustain a population. When women have 1.9 children, the population will fall gently and in a way that is sustainable.

BAD SHAPE
The Chinese government last year eased the one-child policy and couples where one is an only-child can have a second one. Blake doubts this will significantly help the pension problem, arguing it will take more than two decades for this policy revision to have an effect on labour markets or pensions, if any.

Sitau Xu, China director at the Economist Intelligence Unit, says the impact on the pension system will be marginal. “This policy was questionable to begin with and has exhausted its usefulness. The social security system is in bad shape and going forward we need more than higher birth rates to ease the burden on the system.”

Yifan Hu, chief economist and head of research at Haitong, does not place too much hope on the impact of a looser the one-child policy, either. “We do not have a sufficient pool to support the population.”

The share of those Chinese over 65 has almost doubled over the past decade and Hu says this is becoming a burden on society. Assuming China’s current population structure stays the same, Hu says it will peak in 2015 and then decline.

Hu says a more market-oriented approach to managing pensions is needed. Overall returns of the National Social Security Fund have averaged just 5%, Hu adds, making the need for reforms all the more urgent.

“The whole system is not transparent. We do not know how large the funds at local levels are [because] the government has concerns to disclose the size and return of the fund.”

The scandal brought down Shanghai’s former party chief Chen Liangyu and dozens of other high-profile politicians and business people, but harsh sentences and promises of reforms appear to have failed to inspire confidence.

Although it is not clear if the government will allow foreign asset managers to manage pension money, Wang says the chance increases as China seeks to internationalise the renminbi and continues to open up.