There is a new generation of activist investors emerging. Kenneth J. Heinz of Hedge Fund Research says they are watching Japan and are eager become involved as advocates of shareholders and market efficiency alike.

With the exception of Sony, recent activist campaigns have largely focused on US and European targets.

The US and European activist surge was driven by three factors: surging equity markets, exposing underperforming managements and strategies, increasing or normalising of investor risk tolerance and accessible financing afforded by low borrowing costs. Yields are lower in Japan than elsewhere.

HOSTILE
There is a cultural resistance to aggressive activist techniques in Japan, but all of the ingredients that led to a surge in US and European shareholder activism are in place.

Japan may offer even greater opportunities in the years ahead.

While activism can become public and turn into hostile pro-shareholder campaigns against entrenched management, campaigns typically begin as private and often collaborative dialogue between the activist and management.

An activist investor is frequently a large, and occasionally the largest, shareholder in a public company, lending credibility to their positions as a result of having significant financial interest.

Only as a result of reluctance or resistance by management to change, do most campaigns become more aggressive, public or hostile, including proxy fights for shareholder support, efforts to replace individuals on the company’s board of directors or attempts to remove existing management. 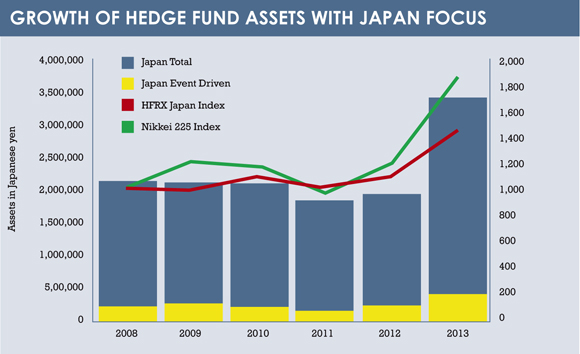 UNREALISTIC
While it would be unrealistic to expect a flood of Japanese-focused campaigns targeted at the large conglomerate, a few well targeted and executed campaigns could serve to substantially improve returns for shareholders and investors.

This should also send a powerful message to underperforming and entrenched management that the activists are watching and eager to become involved, as advocates of both shareholders and market efficiency.

The end results of these are likely to be a win-win for investors and shareholders, with better equity performance for target companies and non-targets alike, in the short and long-term.

Kenneth J. Heinz is the president of Hedge Fund Research