CUSTODY: Of regulations and bikinis

Most announcements from a Chinese regulator are best compared with a bikini. What they reveal is suggestive, but what they conceal is vital.

Last October, the China Securities Regulatory Commission (CSRC) has signalled that it will allow foreign banks to act as custodians for local funds investing onshore.

The regulator also issued the consultation draft paper, Administrative measures on the custody business of securities investment funds, which would allow a subsidiary of a foreign bank in China to apply for the custodian license of mutual funds.

Eric Chow, managing director at BNY Mellon Alternative Investment Services, says the proposed regulation is one of several that would be needed to open the custody market.
Custodians are governed by different entities in China.

Chow says neither the China Banking Regulatory Commission (CBRC) nor the State Administration for Foreign Exchange (SAFE) has indicated what their stance is.

“Changes are driven by regulators,” says Chow, who is based in Hong Kong. “The reason there are so many Qs in acronyms in China is because of all the quotas and restrictions.”

Although Chow says foreign banks need to keep a close eye on these proposals, there is “not an immediate opportunity”.

Kevin Wong, managing director and head of securities and fund services, China, at Citi in Shanghai, says: “Regulators have been progressive, at least within the past 12 to 18 months. It is in their interests to show ongoing reforms in the market.”

While it is not clear how fast the regulator will move forward, Wong says he is “hopeful and optimistic” that the custody market will be open to foreign banks by the end of this year.

He says it is in the regulators’ interests to continue ongoing reforms of the asset management and asset servicing market. At the end of 2012, he adds, China’s total assets under management stood at $450 billion. “As a business value proposition, this is interesting for us and our peers.”

“The regulator has an interest in strengthening the market and improving its processes, systems and service models. It is a competitive landscape, but we can all grow.”

He adds that Citi is exploring opportunities to grow its business in China, but it is vital to get clarity on regulation first. “We need resources to tackle this segment,” he says of the Chinese asset servicing market. “China is evolving and has great potential. What has been done in the past decade is nothing short of phenomenal.”

Wong says it is important that foreign custodians work together to share their expertise with Chinese authorities and market participants.

Whether the market will become a level playing field – where local custodians will have no competitive advantage through regulation or quota schemes – is unclear.

“That is a fair question, which we ask ourselves,” Wong says.

Given their size and reach, even those who are optimistic about the potential of China’s custody market, like Wong, concede “the big four” will have an advantage.

It is expected they will continue to do so, even though brokers, foreign banks and independent financial advisers are seeking approval to distribute mutual funds.

In China, those banks that distribute financial products are likely to also win the custody mandate.

“Looking at the opportunity today, the numbers are attractive, but we need to be careful,” he says. “We have done a lot of work to segment the market and see where the opportunities lie.”

Foreign banks could have a competitive advantage in areas such as derivatives, Wong says, where local banks are starting work “on a blank sheet of paper”.

NICHE
Citi envisages standardised custody services – clearing and settlement – as well as those in the alternative space, middle office and outsourcing.

Wong says only a small subset of foreign banks would consider such a move and that, numbers aside, regulation clearly stipulates the need to have teams on the ground.

As the asset management industry in China matures, it is likely that asset managers will be able to launch different strategies. This is where foreign banks could find a profitable niche.

Chow says there are differences in supporting plain vanilla equity or bond strategies, and alternatives. “The custodian’s experience is the key,” he says.

Reporting requirements, for example, differ, and this is likely to increase with regulation.

“Products are getting more complicated and counterparty risk will increase,” he says, adding that asset managers might give a portion of their custody business to foreign players to diversify.

Chow says trust companies, private equity and hedge funds, dubbed “sunshine funds” in China, could be more inclined to sign up an international custodian. Some institutional asset managers might already have a preferred custodian.

Chow says that some investors might question how custodians manage counterparty risk if they provide custody services for the very products they manufacture and distribute.

Neither BNY Mellon Alternative Investment Services nor Citi were able to give an estimate as to how much cost for custody services are likely to differ from those of their Chinese peers.

But Chow says some Chinese asset managers might be willing to pay a premium for the custody services of an international custodian, as it is often the case with some of the large auditing firms.

Depending on the final details of the regulation, Chow says there is also the possibility of setting up a master custodian in Shanghai or Beijing that then appoints a custodian in Hong Kong.

“Such master custodians can become more competitive with local custodians,” he says.

Fanny Wong, deputy general manager, head of custody, global transaction banking, at Bank of China (Hong Kong), says some second and third tier asset managers may not even be familiar with the global custodian banks outside China.

The new regulation, if adopted, is more likely to be of interest for those foreign banks that are not yet incorporated in China as a separate legal entity.

“Banks as distributors are so important, it is not something foreigners can duplicate in the short run,” Wong says. “Foreign banks have particular client segments they appeal to, not the mass market. [They] will take a selective approach.” 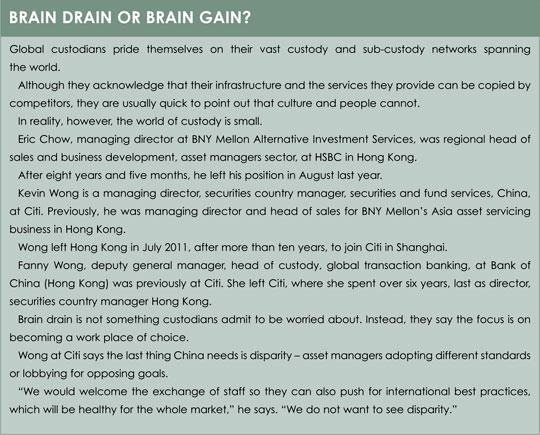 She says while the new proposals aroused some positive sentiment, entering the custody market in China is a difficult task. “The purpose [of the proposed regulation] is to increase competition, bring down the price and ensure a level playing field.”

WAKE-UP CALL
Change will come gradually, she says, adding that the proposals were a “wake up call for custodians to remain competitive and vigilant” because there may be new entrants or niche players that offer more choices.

“We have already adopted most, if not all, international standards,” she says. “Most of the state-owned banks have to build in more flexibility in their business model, but with a new model they need to build in new services.”

As with so many developments in cross-border activity with China, custodians say those with an expertise in schemes such as qualified domestic limited partner (QDLP), qualified foreign institutional investor (QFII) and qualified domestic institutional investor (QDII) schemes are likely to have a competitive advantage. Custodians often play a key role in getting products like QFII funds and QDII funds off the ground.