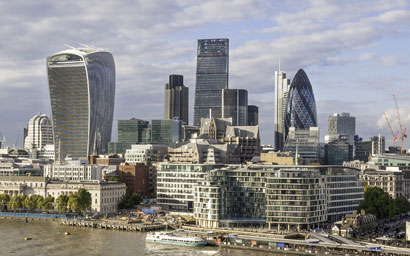 This year, London is the city with the world’s most actively traded property market – and Chinese investors dominate the top tier. George Mitton reports. The judging panel for the 2015 Carbuncle Cup, a prize by Building Design magazine for the worst building in the UK, were unanimous. “A gratuitous glass gargoyle,” said one judge. Another: “a Bond villain tower”. One online commenter said, “I now have a new personal goal: to live long enough to see this building demolished.” These insults did not, however, deter Hong Kong-based Lee Kum Kee Group from spending a record £1.3 billion ($1.7 billion) to acquire the tower known as the Walkie Talkie (pictured left). Another Hong Kong investor, CC Land, paid £1.2 billion for a nearby office block nicknamed the Cheesegrater. Other investors from Greater China piled in. In the first seven months of the year, buyers from China or Hong Kong dominated large acquisitions in the British capital, accounting for seven out of the top ten biggest property deals (see box). These investors believe London property is a safe store of wealth and a potential source of returns. But as the British government meanders towards an untidy Brexit, others are wondering, is London under threat Square Mile
London matters because in the first half of the year, it was the world’s most actively traded property market. In its two most expensive neighbourhoods, the City of London and the West End, buyers spent more than £11 billion between January and August, according to property consultancy JLL. Hong Kong and Chinese investors accounted for more than £5 billion of this sum. The rise of investors from Greater China is due to a booming economy at home, which has created vast amounts of wealth. Investors want to diversify their portfolios and trust that the UK, with its tradition of established property rights, is a secure place for it. Historical ties between the UK and Hong Kong, a former colony, help explain why London is often chosen. But there are other factors at work too. The UK’s surprise referendum result last summer, which set the country on a path to Brexit, caused the pound to slump, meaning the past 12 months have been a perfect time for foreigners to pick up bargains. More broadly, low interest rates and a need for asset security have pushed investors away from liquid assets such as equities and into alternatives, such as real estate. Back again?
Will London property prove to be a good investment? Certainly, the British capital has rewarded property buyers with remarkable price growth in recent decades. Alongside New York, London is one of the most vibrant cities in the world, with a large and prosperous financial sector and a diverse cultural life. Tenants of office blocks such as the Walkie Talkie, which tend to attract multinational law firms, insurers and accountants, pay dazzlingly high rents. Some property specialists are confident the city has bounced back after the shock of the Brexit referendum. “Brexit was expected to have an adverse effect on the commercial market – and so it proved during the first quarter after the referendum, with London turnover sinking to its lowest level in four years,” says Alastair Hilton, partner at real estate specialist Farebrother. “A year on, despite the surprise general election and the return of a severely weakened Conservative government, it’s a different story. Share prices have recovered, transaction volumes are up and big deals are making headlines.”

However, there are clouds ahead for the capital. Brexit, besides lowering prices, has the potential to torpedo London’s status as a business hub. London-based companies that do business in continental Europe are talking of moving staff to cities such as Dublin, Paris or Frankfurt. Without operations within the European Union, they fear they will lose access to the single market. The effect on London’s finance sector could be calamitous. Consultancy firm Oliver Wyman predicts a hard Brexit would put 35,000 jobs in the financial sector at risk. Those lost jobs would presumably cause demand for London property, and commercial rents, to fall. Indeed, sections of the market seem to be anticipating these effects. Research by Rightmove, a property website, found that in the year ending June 2017, average asking prices in inner London fell 4%. “It now seems certain that we will have continuing political uncertainty,” says Miles Shipside, housing market analyst. Changes to stamp duty, a tax on property transactions, were also blamed for a slowdown in the market. Buyers may also worry about the currency. An exchange rate of $1.30 to the pound seems attractive, given that over the past ten years, the rate has averaged at around $1.50. But what if the markets were to devalue the British currency again as the Brexit negotiations drag on? The prospect of a further drop in the pound seems possible given that the UK’s economic growth slowed to a mere 0.3% in the second quarter. Finding a home
On the other hand, these factors may not quench China’s demand for London property at all. Globally, the sum of capital earmarked for real estate investment is expected to rise to $1.4 trillion this year, according to a report by Cushman and Wakefield, a real estate firm. Asia-Pacific will contribute the largest proportion of any region, 44%. Asian real estate markets are awash with liquidity already, meaning prices there are not attractive. Nor can Asian cities compare with major Western capitals in terms of asset size. For an investor bent on spending $1 billion or more on a single property transaction, only a few cities are worth looking at. London is one. Eric Pang, head of the China desk at JLL, predicts Chinese investor demand for London property will stay strong. They are less concerned with short-term currency movements than local investors, he says, because they “seek diversification and ‘safe-haven’ forms of investment, and are less concerned with traditional return benchmarks”. Then there are structural trends pushing institutional investors towards real estate. Since the 2008 financial crisis, many institutions have developed a two-pronged strategy: on the one hand, they shifted their equity and bond mandates into passive funds, saving money on management fees; on the other, they invested more in alternative asset classes, such as real estate, hoping these assets would generate the kind of uncorrelated, market-beating returns their conventional investments were not providing. This bifurcation has had a striking effect on portfolios. The average real estate allocation among sovereign wealth funds has doubled in two years to 8% of assets under management, according to an annual survey commissioned by Invesco. Nice fees
Generally speaking, asset managers are happy about the rising demand for alternative investment – these kinds of transactions generate higher management fees than bond or equity funds. However, there may be a lesson for Asia. According to a report by investment consultancy Willis Towers Watson, there are no Chinese firms among the top 100 managers of alternative assets. Indeed, only two firms from the whole of Asia made it into the top 100, and both were from Australia. Given how much Chinese investors spend on property, there is an opportunity for Asian managers to improve their real estate capabilities and begin earning lucrative management fees. ©2017 funds global asia