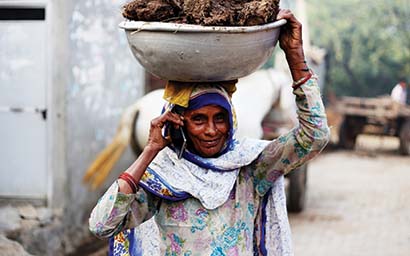 Transforming India’s rural population into a middle class that consumes is a key objective of India’s re-elected leader, writes Praveen Jagwani, chief executive of UTI International. Over the course of five years, India grew at an impressive CAGR [compound annual growth rate] of 7.8% to reach $2.67 trillion in March 2019, briefly eclipsing the UK and France in absolute size. But its growth rate has shockingly declined to 5% in the April to June quarter – almost in tandem with the synchronised global slowdown, despite India not being an integral part of the global supply chains. Prime minister Narendra Modi’s new target is for India to be a $5 trillion economy by 2024-25, but to have a realistic shot, transformative reforms will be needed with growth rates north of 8%, inflation below 4% and a stable exchange rate. More governance, less government
To achieve the $5 trillion goal in a sustainable and inclusive manner, Modi needs to spin India into a higher orbit – that of a virtuous cycle of productivity-jobs-consumption. The sector most responsive for productivity gains (of input variables like capital, labour and land) is manufacturing. Compared to global averages, manufacturing is our laggard and therefore fixing it ought to be our strategic solution. Ideally, the impetus for boosting it should come from the private sector. Under the right conditions, commercially driven entrepreneurs should identify and seize profitable business opportunities by injecting capital into industry. The job of the government is then to create the ‘right conditions’ that incentivise capital creation. Creating these will be crucial – and it requires a multi-pronged approach. Right conditions include, among other things, a framework of business-friendly regulations and availability of reasonably priced credit. Clearly the conditions have not been right, for the private sector has not been too excited about launching new projects or expanding capacity in the past decade. Thus, job creation has been weak. In the absence of job and capital creation by the private sector, the government would need to step in to prevent the economy from stalling. Luckily, Modi sent precisely that memo to his finance minister. Continuing reforms
The latest reforms unveiled by the finance minister have compensated for the somewhat insipid budget she presented a few months ago. Cutting the statutory corporate tax from 30% to 22% has been well received by industry, the stock market and global businesses. Indian businesses will now pay tax at a lower rate than the global average corporate tax of 23.79%. The budget had already set the stage for massive government expenditure on infrastructure – especially rural roads and railways. Another big outlay was for rural development and affordable housing. The third area was recapitalisation of the banking system to provide the much-needed credit for economic expansion. One can only hope that such an aggressive multifaceted strategy bears fruit. The unemployment rate in India was recorded at 6.9% during 2018, with the agricultural sector being the largest employer (42.7%), followed by services (33.5%) and manufacturing (23.8%). The top five sectors in terms of employment generation as of 2017 were railways, construction, infotech, food processing and automotive, and these will deliver the biggest bang for the job-creation buck. Rural India is the key
To have maximum impact on growth, Modi’s core objective is to lift rural India out of poverty and accelerate the creation of the middle class. Rural India makes up 66% of the population and 70% of the country’s workforce and its economy constitutes 46% of national income. By 2050, more than 50% of India’s population will still be rural, despite rapid urbanisation. Contrary to common perception about the predominance of agriculture in the rural economy, about two-thirds of its income is now generated from non-agricultural activities, making it vital that Modi engineers a sustainable transition of output and occupation from agriculture to the more productive non-farm sectors. Such an ambitious programme of infrastructure and job creation requires a lot of money and the tax cuts just announced will only serve to inflate the fiscal deficit. The solution seems to be to increase tax collection. Within days of being re-elected, Modi sent a strong message by sacking a dozen of the more senior bureaucrats in the tax department. While tax collection has improved, it is not keeping pace with projections made after demonetisation and the implementation of the Goods and Services Tax (GST). Financing the growth
Demonetisation triggered a staggering increase in digital transactions and a jump in mutual fund investments. The number of people who filed income-tax returns has risen from 38 million in 2014 to 68.6 million in 2018. GST collections in June 2019 grew 4.5% year-on-year, well below nominal GDP growth. One significant area where the full potential of the GST has not been achieved is the rollout of the simplified tax-compliance regime. After two years of the GST, the system validated Input Tax Credit through ‘invoice matching’ is still not in place. Unless invoices can be matched automatically across the entire supply chain, the full extent of the promised benefits of this reform will remain elusive. On the flip side, India remains starved for credit. Despite the reduction in interest rates, the transmission of monetary policy has been poor. Plagued by legacy non-performing loans, the public sector banks (PSBs) have been sluggish. While some of the credit vacuum was initially filled by NBFCs (shadow banks), they too imploded as liquidity shrank. In a bold move last month, the government announced radical mergers. The 27 PSBs that existed in 2017 have now been consolidated into 12 in the hope of deriving improved focus and control. The private banks or the NBFCs are not capable of lending for the long periods over which infrastructure gets built. Ideally, such funds should now come from the bond market. The passage of insolvency and bankruptcy reform has made this feasible. A vibrant bond market calls for not just the instruments to hedge credit, interest and currency risks, but also a larger number of market participants. Absorbing rural India’s masses into a consuming middle class seems to be the preferred formula for this government and achieving this by creating non-agricultural jobs in rural India will be the bedrock of that journey. ©2019 funds global asia