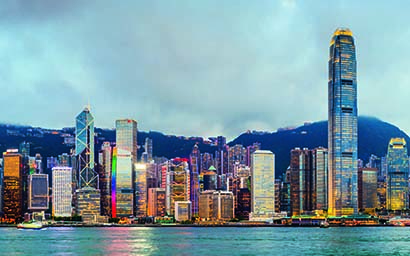 Will a local funds hub supersede the Caymans as the principal domicile for alternative funds in Asia? These and other issues were discussed at a Hong Kong event hosted by Caceis, at which Funds Global Asia was media partner. Funds that invest in alternative asset classes, such as private equity, real estate or infrastructure, are in fashion in Asia as they are elsewhere in the world. But the Asian region has not yet produced a market-leading domicile for cross-border alternative funds. Instead, funds structured in the Cayman Islands tend to predominate. But will this change? This was one of several questions examined in a special research project produced by Funds Global Asia in partnership with asset servicing firm Caceis. Lux on the up
The results of this survey, based on 22 respondents in Asia, were presented at an event at the Hong Kong Bankers Club in September, along with the findings of a global research project including more than 200 respondents that was carried out by our sister title Funds Europe, also in partnership with Caceis. As expected, a majority of the Asian respondents (59%) deemed the Cayman Islands the market-leading domicile for alternative funds that are managed or distributed in Asia. The islands scored far better than the second-placed domicile, Luxembourg, which attracted 18% of the responses. According to this finding, the Asian domiciles have a long distance to travel if they wish to overtake the popularity of the established leader. Just 13% of respondents said Singapore was the market leader while no one said the same of Hong Kong. 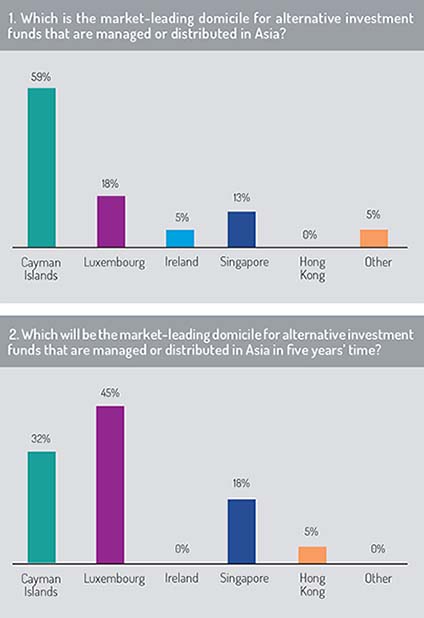 Regulators and policymakers in Asia are nevertheless seeking to attract more alternative funds to domicile within the region. Singapore, in particular, is hoping its new fund structure, the S-Vacc (discussed widely elsewhere in this issue) will prove appealing to alternative fund managers. Unfortunately, our respondents indicated some scepticism that the efforts of Singapore will achieve success. When asked which would be the market-leading domicile for alternative funds that are managed or distributed in Asia in five years’ time, only 18% of respondents chose Singapore – a rise of just five percentage points. Hong Kong was chosen by 5% (see figure two, next page). Instead, respondents put their faith in Luxembourg, which attracted 45% of responses. Already a market leader in Europe, Luxembourg, according to our respondents, is poised to become the most popular alternative funds domicile in Asia too. Our respondents think it is on course to overtake the Cayman Islands, which gathered 32% of responses to this question. This result will clearly please the Luxembourg funds industry and its representatives abroad, but will perturb those in the Cayman Islands and offer little encouragement to the local efforts of Singapore and Hong Kong. Responsibility
Another important question facing fund companies and investors in Asia is how to engage with environmental, social and governance (ESG) investment. This investment approach seeks to allocate capital to companies or bond issuers with good records on, for example, pollution management and independence of board members, while denying capital to those who score poorly. The aim is to invest responsibly. Although ESG has not historically been a significant trend in Asia, this investment approach is gaining momentum and many Asian investors are fast catching up with their peers in, for example, Scandinavia, which has a long-established history of ESG investment. We asked our respondents whether they thought ESG in Asia should be mandatory and received a surprisingly high result, 36% (see figure three). A larger proportion thought ESG should be optional, while only 5% said ESG was “not important”. 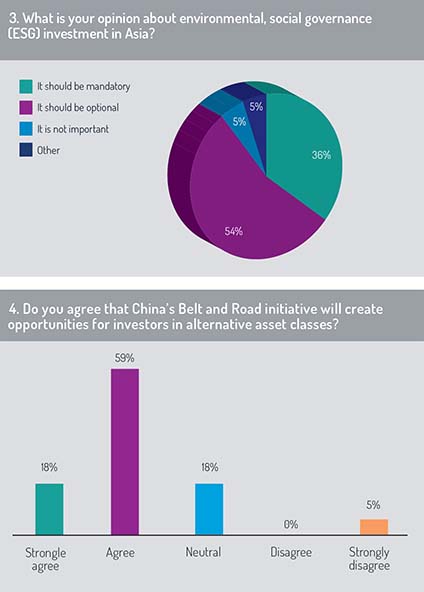 Although this finding highlighted some scepticism about ESG, the figures will be reassuring to those fund managers that offer ESG capabilities in Asia – and may prompt others to ramp up their in-house capacities to meet what appears to be a growing demand. OBOR
The final question in the Asia survey asked respondents to consider China’s One Belt One Road initiative and say whether they thought the scheme would create opportunities for investors in alternative asset classes. There was broad agreement. A total of 78% said they thought there would be opportunities, of which 18% held the view strongly (see figure four). The result suggests an optimistic view among the funds industry in Asia that may help to dispel some of the critical commentary that the One Belt One Road scheme has attracted. This criticism has tended to characterise the initiative as a geopolitical manoeuvre designed to spread Chinese influence abroad. Some sceptics have further claimed that Chinese state-owned enterprises will be the main beneficiaries of the programme, leaving little space for private investors to play a role. Our respondents seem not to hold this pessimistic view, which will be encouraging for those alternative asset managers that hope to capitalise on One Belt One Road infrastructure development. Panel time
After these results were delivered, as well as the findings from the global survey (which is available online on the Funds Europe website), a panel of locally based funds industry experts took the stage to discuss the main points from the presentation. Fabrice Chemouny, head of Asia-Pacific for Natixis Investment Managers, said he shared the optimism of the majority of survey respondents about the potential for significant asset growth in Asia, in which his firm operates several subsidiary managers as part of its multi-affiliate model. Stéphane Karolczuk, head of the Hong Kong office of Luxembourg-based law firm Arendt & Medernach, was understandably pleased about the expectation of many respondents that Luxembourg would grow in importance as a domicile for Asian managed alternative funds in the next five years. Vincent Ng, chief executive of De Tiger Equity Fund, said he was optimistic about the future, but cautioned that the funds industry would have to adapt to changing trends in terms of online banking and digitisation. Meanwhile Betty Zhou, head of business development of Caceis in Hong Kong, shared several pieces of data to support the survey findings, including an analysis of the number of Asia-based entities that have signed up to the United Nations Principles of Responsible Investment, an initiative that aims to promote ESG methods. ©2018 funds global asia