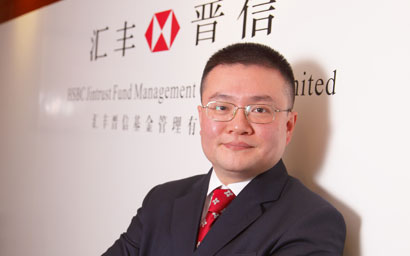 Despite its name, HSBC will always be a âforeignâ bank in China. But its local asset management arm isnât letting that slow its asset gathering. George Mitton reports from Shanghai.

Dong Wang is pointing down seventeen storeys to a roundabout in the Pudong area of Shanghai. “It’s feng shui,” he explains. By resembling coins, the circles created by the roundabout, a walkway above it, a nearby Apple Store, and two globes on the distinctive Oriental Pearl Tower are thought to have a magnetic effect on wealth.

The location of Wang’s office in the Shanghai International Financial Centre is auspicious too. The area, home to numerous bank headquarters and some seriously premium shopping space, is beside a bend in the Huangpu river. The idea is that money ‘flowing’ down the river will gather here.

It’s hard to say whether feng shui has played in part in HSBC Jintrust’s accumulation of assets, but surely it has done no harm. With more than $3 billion under management and advisory, the mainland asset management division of HSBC has grown steadily since its establishment in 2005.

Indeed, Wang, who is the chief executive, is confident about more growth to come, believing that, as a bank, HSBC may find that mainland China becomes its “third home” after the UK and Hong Kong, the two markets where most of its earnings are concentrated.

“China is at the top of the list for the group,” he says. “We have historical heritage and the brand is highly recognised. There are challenges, of course. Foreign banks are playing catch-up in China, but the market is opening and the new cross-border opportunities will help us.”

KNOWN NOT LOVED
It should be no surprise that an HSBC venture is well-established in China. This is, after all, the Hongkong and Shanghai Banking Corporation we’re talking about. Unlike many foreign banks that arrived in China in the past two decades, HSBC has always been well-known here, which may explain why it could afford to choose a relatively little-known Chinese partner for its asset management joint venture. Shanxi Trust & Investment, established

by the Shanxi provincial government, owns 51% of HSBC Jintrust, but Wang says, “by contract”, HSBC makes the decisions in the partnership.

HSBC’s brand, though recognised, has not always been loved, however. Established by a Scotsman in 1865, HSBC dealt in opium among other things in its early days. Regardless of its name, it will always be regarded as a foreign bank.

Because of its foreign designation, HSBC’s branches in China were not allowed to sell HSBC Jintrust funds until a change in the law in August 2013. Until that time, HSBC Jintrust distributed its products through Bank of Communications, a Chinese bank in which HSBC Group has held a stake since January 2005. Wang describes the prohibition as “unfortunate, because local banks are sometimes not up to the internal standards we require in terms of sales and client process”.

INSURERS
Though fund distribution today is freer than before, there are still regulatory hurdles to cross in China. For instance, a growing area of interest for the firm is the insurance sector. Wang says HSBC Jintrust already counts a number of mainland insurance firms as clients, but says these companies are limited to investing only a portion of their assets into pooled funds. Asset managers would like to take on full outsourcing mandates, but these are difficult to arrange because the insurance industry has its own regulator.

But in terms of the technical details, it’s not an equal footing. It makes things more difficult for the buy-side.”

If outsourcing mandates become more common, the opportunity for asset managers could be significant, especially for a firm such as HSBC Jintrust, which already has a large institutional business. About 70% of the firm’s assets under management are from institutions, he says.

It would help, adds Wang, if regulators were able to harmonise their rules, especially in cases where one or more regulators is overseeing the same kinds of activity.

“The lesson drawn from the last year’s volatility is that there should be more regulatory co-ordination,” he says.

MISCONDUCT
HSBC Jintrust has not always had it easy in China. In 2014, Lin Tongtong, former manager of the HSBC Jintrust Longteng fund, was tried for alleged insider trading. Lin was accused of building up personal wealth in private accounts in the name of a college friend. Lin reportedly turned himself in to police in October 2014 having left the firm some months earlier due to health problems. In the trial, he reportedly said: “I confess the guilt but I didn’t mean to manipulate the market.”

Given that Lin’s activities occurred outside of the office in his own time, it is unclear whether HSBC Jintrust should be held responsible. One reason for the media attention generated by the case may be resentment at well-paid fund managers in a country where the fruits of an economic boom have not been distributed equally.

Nevertheless, the case created some unfortunate headlines for a company that is trying to present an image as a trustworthy manager of investors’ money.

ACROSS THE RIVER
Besides assets gathered onshore in China, HSBC Jintrust manages money from HSBC clients who are outside the country. “For all HSBC products outside China, if they have an A-share portion, we are the adviser,” says Wang. HSBC Jintrust runs five mandates under the qualified foreign institutional investor (QFII) scheme and one mandate under its offshore renminbi variant, RQFII, all within the group.

The Mutual Recognition of Funds scheme between Hong Kong and China might offer another way to bring in foreign money. The HSBC Jintrust Large Cap Equity Securities Investment Fund was one of the first four mainland-domiciled funds registered for sale in Hong Kong.

Mutual recognition is in fact one of several access routes, or ‘bridges’, by which money can cross China’s borders. Wang says he is confident the opening up of China’s capital markets is only going one way. Eventually, he suggests, access will be almost completely free.

“Each bridge has its pros and cons,” he says. “Some are wider than the rest. We think in the end there will be so many bridges, you will no longer need one – the river will be gone.”