Part guidebook, part polemic, The Money Formula by Paul Wilmott and David Orrell is a journey into the arcane world of quantitative finance. review by George Mitton. Elegant and authoritative, mathematical models are as beguiling to the initiate as they are intimidating to the outsider. And because they are seductive, they are credited with powers of prediction they simply do not possess. That is the essential message of The Money Formula, a romp through the absurdities of quantitative finance. Witty and informed, it nevertheless tells a depressing story. Not only is this sector infested with grossly overpaid financial whizz kids, whose hubris has caused or exacerbated a series of financial crises. Not only have the huge salaries offered in quantitative finance lured away talented scientists who could instead be solving the energy crisis or curing cancer. All this is annoying enough, but the most frustrating thing, as the authors explain, is that most quantitative finance models don’t even work. Or, at least, not as well as people imagine they do. Why, then, do investment banks and hedge funds continue to put their faith in flawed models? The answer says as much about human nature as it does about maths. Crazy maths
It is relatively easy to find historical examples that prove the shortcomings of quantitative models. The authors examine the historical performance of the Dow Jones Industrial Average, a longstanding index of the US stock market. The biggest rate of change in any 100-day period occurred after the Great Depression when the market rebounded with a 79% return. 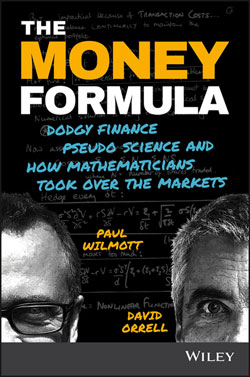 This was an odd finding, because “the probability of that event, according to the normal distribution, is such that it shouldn’t happen once in the age of the universe, let alone the age of the Dow Jones”. Why does this matter? Because the efficient-market hypothesis, the surprisingly widespread view that stock prices always incorporate the sum total of market information, rests on an assumption that stock price changes are normally distributed, a common probability distribution often called, informally, the bell curve. But, as this example indicates, history provides plenty of freak results that defy such a model. Why, then, do so many economic models assume the normal distribution? In a sense, the answer given in the book rests on psychology. Practitioners of quantitative finance want to believe in a sort of Newtonian universe where everything is stable and predictable. But the movements of the universe – and certainly the financial markets – are not stable. Indeed, the authors claim stock prices more closely follow the power-law distribution, which models complex systems characterised by extreme events and bursts of intense volatility. “This is also sometimes called the ‘edge of chaos’ because such systems aren’t fully random or perfectly ordered, but instead operate in the interesting space between those extremes,” write the authors. The conclusion drawn in the book is both an indictment of the quantitative financial industry and, simultaneously, an invitation to challenge it. As the authors put it, “efficiency is a con, and the markets can be gamed. You just need to know the flaws in the system.” Model abuse
The authors are well qualified to lead this inquiry into the excesses of quantitative finance. Paul Wilmott is very much an insider. The former founder of Caissa Capital, a hedge fund, he also publishes a journal, Applied Mathematical Finance, provides distance teaching on the subject, and has written academic papers. His co-author, David Orrell, an applied mathematician, runs a scientific consultancy and has published numerous popular science books. Wilmott’s perspective, as someone who has worked in quantitative finance for years, is revealing. The book explains, for instance, how quickly quantitative models, which are supposedly objective and scientific, can be abused when practitioners are faced with incentives such as wanting to make money for their employer or to keep their trading desk happy. A good example is the value at risk (VaR) formula, which is designed to estimate the maximum an investor is likely to lose in a worst-case scenario over a certain period. Risk management teams are, naturally, wedded to the VaR formula, which promises the possibility of quantifying their employer’s total risk and, it is hoped, eliminating it. The problem is that VaR calculations are based on assumptions. Risk is estimated based on an asset’s past volatility or on the assumption that stock price changes are normally distributed, for instance. All it takes is to tweak the assumptions and a risky investment seems a lot safer. The authors report the story of a quantitative analyst who was told by a trader to redo his VaR calculation to produce a lower number, which would indicate less risk. “If I couldn’t then the trader would have to scale back his positions. He didn’t want to do that. He could make my life very difficult,” recalls the unnamed analyst. Perhaps the most harmful example of model abuse in recent years concerns the mispricing of collateralised debt obligations, the bundles of mortgage assets created in the run-up to the financial crisis of 2008-09. Faced with the problem of estimating default risk by underlying mortgage holders, modellers hit on a strategy used by insurers to price joint policies. The cupola effect, as it was called, reduced the correlation of default risk among cohorts of 1,000 or more mortgage holders to a single variable. The problem? The variable was a gross simplification, a numerical sleight of hand that made the whole confusing jumble seem a lot simpler and more predictable than it was. The reliance on such modelling gave investors, banks and ratings agencies a false sense of security, believing their risks were hedged when, as we all know, institutions around the world were hideously exposed to the collapse of the American housing market. Too many options
Quantitative finance has yielded some useful discoveries. The Black-Scholes method for pricing European-style options, for instance, was a valuable breakthrough. The authors spend some time on this and other derivative pricing models, reflecting Wilmott’s academic interests. The problem, however, is that such models have facilitated the growth of a dangerously large market for these kinds of instrument. “The infiltration of derivatives into society is like an inoperable metastasized cancer,” they write. Models make this behemoth seem less frightening, but if we realised how flawed the models are, we would be terrified. 2017 funds global asia