Inside view: Why Japanese small caps are about to strike back 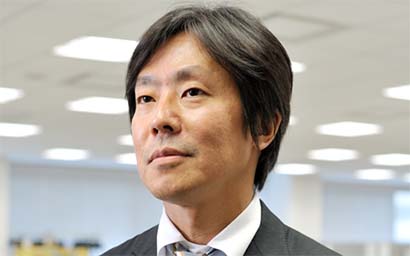 In Japan and around the world, the Covid-19 pandemic has rapidly changed lifestyles and work practices, writes Satoshi Marui of SuMi Trust. Above all, the pandemic has served as an accelerator of digital transformation, especially in Japanese small-cap companies which have become a hot place for investors looking for alpha opportunities. Japanese large-cap companies tend to have big exposures to legacy businesses and are often slow to transform their operating models, while small and medium-sized enterprises are more agile and have the ability to adapt and pursue new business opportunities. Over the coming years, we will see smaller companies increasing their presence by acquiring business from slower and less nimble large corporations. In addition, relative valuations between small and large caps have been a good indicator of performance in the past. So long as Japanese small caps are not valued too highly compared to large caps – which is not the case now – history tells us small caps will outperform. The ‘small-cap premium’ exists
It is widely believed that in the long run, small caps outperform large caps. Historically this is the case in the Japanese market. Japan’s small-cap index posted better returns than its large-cap peer over the last ten years. Japanese small caps also boast lower volatility and have delivered better risk-adjusted returns than larger companies. The small-cap market has posted 2.1% annualised excess return against large-cap companies since 2002. However, although small caps have reported higher returns than large-cap stocks in the long run, there have often been extended periods where small caps underperformed large caps. For example, the Japanese small-cap market delivered much lower returns than its large-cap counterpart from January 2006 to April 2008 (-36% versus -11% respectively), when an accounting scandal in the rapidly expanding internet conglomerate Livedoor, relating to its past M&A activity, hit the market (the Livedoor stock was delisted in April 2006). Small companies also underperformed larger companies from September 2011 to May 2015 and since June 2018. Relative valuation is attractive
Overall, records show small caps outperform large caps in the years following a period when small-cap valuation is in line with that of large stocks. In other words, a small-cap index will likely lag behind a large-cap one in the years after the relative valuation of small-cap stocks is stretched. In early 2015, the valuation premium of small-cap stocks against their large counterparts was almost nil and as such, small-cap investors enjoyed excess returns against large-cap investors in the years following, including in 2016 and 2017. In contrast, small-cap stocks were trading at a premium against large-cap stocks in 2018 and this contributed to their underperformance. At present, the valuation gap between large and small caps has been narrowing and it is now in negative territory, something we have hardly seen for the last five years. This suggests that the small-cap market will outperform the large-cap market in the coming years. Gems in the segment
It is not just an analysis of historic market trends and an extrapolation to the present day that leads us to conclude Japanese small caps are set to strike back, though. More importantly, these stocks are set to benefit from some specific tailwinds in Japan. Digital technology is playing a larger role than ever due to the pandemic and this trend will only accelerate. We are in a period of rapid change, which provides a huge opportunity for small companies to establish themselves and flourish. Being more agile and flexible, they are better placed to launch new services or adopt new technology versus their large-cap competitors. 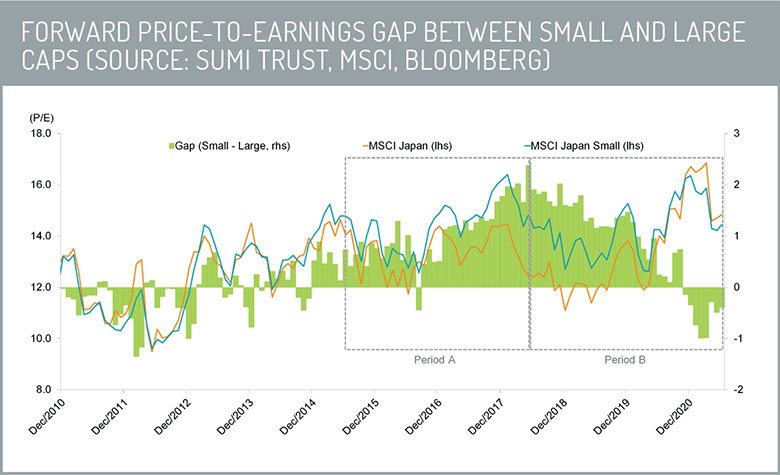 An example of Japanese small caps set to benefit from this is SRE Holdings, a ‘property tech’ company providing digital and artificial intelligence (AI) solutions to the real estate market, particularly to brokerages, which in Japan tend to be small companies operating in a fairly old-fashioned way. Currently a number of regulations in the real estate sector in the country prevent modernisation through digital solutions and AI. However, the Suga administration is liable to roll these back and SRE is extremely well placed to take advantage of this when it happens. Another is SIIX, which provides electronics manufacturing services (EMS) to manufacturing companies in the automotive, industrial and consumer electronics sectors, covering the whole value chain – from procurement of parts and logistics to assembling and producing products on a global basis. For SIIX, the ever-growing trend of electrification, whereby cars use more electrical components, and electric vehicles (EVs), is proving a major boost to growth. In the automotive industry, component companies and automotive companies have increasingly been making use of outsourcing in production and this trend plays into the hands of SIIX and other EMS providers. In addition, SIIX has allocated resources to expand business with global manufacturing companies and has secured contracts to supply multinationals such as Bosch, the German auto-component manufacturer. SIIX plans to expand its global business by forging new deals to supply large global auto-component producers and is set for strong growth. The small-cap sweet spot
Overall, given the attractive relative valuation of small-cap stocks and tailwinds for SMEs from rapid societal changes, the Japanese small-cap market is likely to offer attractive returns in the coming years. This market is a good hunting ground for active investors, with plenty of uncovered gems that can generate alpha and that cannot be found in passive vehicles.