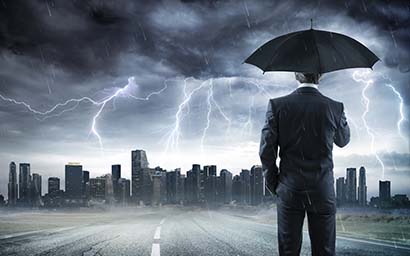 The global economic downturn triggered by Covid-19 has increased debt-default levels as losses ripple through bond markets – but the conditions for a perfect storm were in place before the pandemic, writes Romil Patel. “Prior to the Covid-19 situation, we were noticing with our models and research that there was a higher level of debt and a decline in credit trends already growing in the system,” says Matt Eagan, an executive vice president of Loomis, Sayles & Company and portfolio manager for the Loomis Sayles fixed income group. “That’s common at the later end of what was a very long expansion, where the underwriting and the crush for yield was causing underwriting standards to dip and things were getting financed that probably shouldn’t have,” he adds. “It takes some sort of event – usually an economic event – for it to spill over, and we’re getting that now.” One potent impact of the pandemic has been to accelerate bankruptcies in areas that were already priced like they were going to fail. The hydrocarbons sector has been among the largest cohort of casualties, given the secular headwinds of changing technology, industry disruption and the move towards cleaner energy in accordance with the Paris Agreement. Other sectors that have been particularly hard hit include transport, leisure, consumer discretionary, gaming and retail. Businesses that depend on frequent human interactions are most at risk of getting caught in a distressed scenario in the coming cycle.
Investors are bracing themselves for higher default rates over the coming year. Pictet Asset Management expects a figure of between 6% and 7% in Europe and, due the heavy impact on energy companies, 11% to 13% in the US. So, what does this all mean for investors – and what constitutes a good opportunity? Good companies, bad balance
“Usually in the distressed market, you’re looking for good companies with bad balance sheets,” says Eagan. Investors will look for a business with good long-term prospects – then, with less debt, they will get it back on track, reduce the financial distress that’s priced into the company and reliquify it to reap the rewards. This category of business has only grown in the wake of an unexpected pandemic. With Covid-19 still very much at the forefront of everything, there is acute pressure to find and adapt to ‘the new normal’. Government responses to the emergency have varied widely, however, so investors must consider individual assets in different jurisdictions and whether entities in certain sectors can adapt to implement a more effective business model. This is where the global picture is fragmented. Right now, Asia is coming out of the first wave of the pandemic – and while there are risks of a second wave, it is quite contained because governments, businesses and individuals are much better prepared, says Arthur Lau, head of fixed income for Asia ex-Japan at PineBridge Investments. “The contagion implication from the impact of the second wave is quite manageable. We need to live with this potential comeback of the virus until there is a vaccine – so it may take a year or more until an effective cure is found. The business operation may not be able to survive this for another 12 or 18 months, given the cashflow, the top line revenue, which is significantly reduced,” he adds. New business models
Amid severe travel restrictions, the airline industry has been disproportionately affected by Covid-19. As of April, the number of flights globally had dropped by 80% compared to last year, according to the International Air Transport Association. As the world begins to emerge from the first phase of lockdown, there are questions around passenger capacity and whether airlines can survive under traditional business models. “Yes, there are assets that offer a very attractive entry level, but will the buyers like us be able to unlock the value based on the old business model or on the assumption that the operational environment will go back to pre-pandemic levels?” asks Lau. “Probably not, so that is why – even under the distressed scenario – you need to be extremely selective and forward-looking as to how this will pan out under ‘the new normal’. We need to assume that the company can survive in ‘the new normal’ before we can look at the asset and assume that it is of a certain kind of value.” A number of major carriers, including American Airlines and Singapore Airlines, have received financial aid in varying degrees and forms, but budget airlines may not be eligible for such support and are highly likely to face some form of restructuring or liquidation. “If I point to some frontier markets like SriLankan Airlines and some local airlines in India, they are under even more distress, because either the sovereign is weak, or they may not receive any sovereign support,” says Lau. “A derivative of these airlines will be the airport operation. The traffic of some regional airports has dropped significantly, which caused cashflow issues, and that will also be focusing more on the ASEAN and weaker sovereign airports. This industry has no shortage of news in terms of distressed scenarios.” China’s domestic consumption
The closure of international borders has severely impacted many national carriers. In China, on the other hand, domestic flights account for almost 90% of total air traffic, cushioning the blow to its airlines. As the Chinese economy picks up again, the impact on the aviation sector over the longer-term will be reduced, as it can rely on domestic travel and air traffic. This phenomenon illustrates its domestic consumption story in microcosm.

“What makes China particularly interesting to investors is the short to medium-term ability for the country to rebound,” says James Donnan, managing director of Intertrust Hong Kong. “The tactical and economic tools that are available for the country to rebound make it particularly interesting for a good turnaround opportunity, and underpinning that is the long-term fundamentals. “To break that down, the tactical ability for the country to respond is driven in part by the government’s ability to steer the response to the virus, but what’s interesting about China compared to the rest of Asia and other markets is the economic diversification. “When you compare China to other Asian countries, there are so many tier 1, 2, 3 and beyond cities that contribute to that economic output. It means that what we’re looking at over the next year or two is a continuous W-shaped rebound as coronavirus clusters spike and subside,” adds Donnan. “But because of the diversification across all these cities, when China shuts down – and it has the ability to shut down – they shut down one or two cities, the relative impact is a lot less significant than other economies. That gives the country the ability to rebound quicker, and then you’ve got the long-term macroeconomic shift with this emerging consumer base and emerging middle class that’s driving this domestic consumption, which will keep the economy tracking along.” While global investors currently identify some gems in the distressed debt environment, the final choice comes down to feasibility. Restructuring companies and unlocking the asset value takes time, but managers will also want to consider the size of their stake and whether they’ll have any say in terms of voting rights and a place on the steering committee – in other words, their ability to define the direction of the restructure. Ultimately, the Covid-19 pandemic has opened up distressed debt opportunities, but how that translates into action remains to be seen. Investors are in preparation mode for the time being, but the bulk of investment activity is projected to begin in the fourth quarter and moving into 2021. This article first appeared in Funds Global Asia © 2020 funds global asia