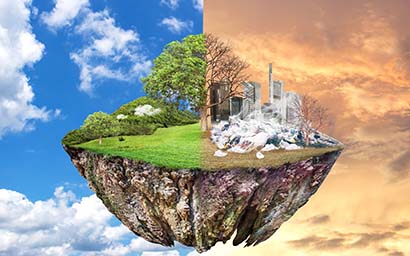 The climate crisis has focused global attention – from governments, financial institutions, corporates and the public at large – on carbon emissions. But the other side of the coin, biodiversity loss, has received far less attention, writes Romil Patel. Climate change can be neatly summed up in a single indicator – achieving net-zero carbon emissions. Biodiversity, however, is far more complex, multi-faceted and location-specific in that it cannot be reduced into one overall focus or figure; it means different things for particular sectors, issues and geographies. Biodiversity is intrinsically and inherently a local issue within the interconnected global context. “One of the most difficult things with biodiversity is actually that it’s in the name itself – we’re talking about diversity, we’re not just talking about the abundance of species, we’re talking about the diversity within and between species and ecosystems,” says Katie Leach, senior programme development manager – biodiversity at ShareAction. According to the UN’s Principles for Responsible Investment (PRI), halting biodiversity loss is vital to realising its Sustainable Development Goals (SDGs), 80% of which are dependent on biodiversity. “Nature provides ecosystem services, which benefit businesses and society,” the PRI team noted in a discussion paper on investor action on biodiversity. “The assets that underpin these services are called natural capital. Biodiversity is the variety of living components that make up natural capital.” Whilst our lives are inextricably intertwined with biodiversity and, by extension, natural capital, our relationship with these services, such as pollination, have not been appreciated and reflected in our financial models – far from it. “Recognising natural capital is something that’s quite recent in the lexicon,” observes Rob Appleby, co-founder of The Cibus Funds and an organic farmer. “Previously, if you picked up any company’s balance sheet or financials, you didn’t see mention of natural capital, but natural capital is everything in nature that we use but heretofore haven’t paid for or recognised.”

For investors, addressing biodiversity means really understanding their impacts and dependencies on biodiversity – and where they come about in the portfolio. The Intergovernmental Science-Policy Platform on Biodiversity and Ecosystem Services (IPBES) identifies five direct drivers of biodiversity and ecosystem change: land-use change, climate change, pollution, natural resource use and exploitation, and invasive species. “If we can tackle those drivers of biodiversity loss, then we go a huge way to tackling the key problem and moving towards having a net positive impact,” says ShareAction’s Leach. The global food system
One addressable starting point for investors is to consider our relationship with food and the system around it. According to a Chatham House report, this is the principal driver for accelerating biodiversity loss and, by extension, a major contributor to global greenhouse gas (GhG) emissions. Our intense pursuit of higher food production at lower cost has led to habitat loss as natural ecosystems made way for crop production or pasture. As the Chatham House report ‘Food system impacts on biodiversity loss’ points out: “Converting land to agriculture results in habitat destruction and biodiversity loss because the clearance of natural ecosystems, such as forests, removes the sources of shelter and food that wildlife species depend on to survive and thrive.” It adds: “According to the ‘Red List’ maintained by the International Union for Conservation of Nature (IUCN), agriculture is an identified threat to 24,000 of the 28,000 species so far documented by IUCN as at risk of extinction. In marine ecosystems, fishing is the largest driver of biodiversity loss.” So, how do we feed an ever-growing global population with good-quality, high-calorific cheap food without increasing carbon emissions, while preserving ecosystems that help provide resilience against climate change and give us the very natural services on which our survival depends? “The answer is intensive sustainability,” says Appleby. “That may sound like a paradox, but every time the footprint of Swindon or Christchurch or one of these towns in the UK is expanded, so too is the opportunity to link a power system. It might be a biomass power system or combined heat and power (CHP) to an associated array of farming techniques which only today we’re getting better at. “If you can get cheaper cost of production through cheap heat, cheap CO2, you can start to become very competitive with growing these vegetables or fruit. Remember, we [in the UK] import nearly 50% of our veggies and over 80% of our fruit from abroad. If we can import substitute that fruit and vegetable supply link, we start to do better for farmers and the environment by exiting out the CO2 footprint and we start to have this circularity associated with having more houses, having greater urbanisation – but doing so without acosting the earth.” The current prevailing take-make-waste economic model damages natural capital on the way in and on the way out, and climate change is a side effect – but investors do have the power to help evolve this model alongside policy and regulation in order to operate within planetary boundaries. What are we waiting for?
Market forces are helping shift the paradigm as the cleaner, leaner option becomes cheaper – the most notable example being renewable energy undercutting fossil fuels.

Chris Kaminker, head of sustainable investment research and strategy at Lombard Odier Investment Managers (LOIM), says: “There are a number of other technologies that help us with climate change mitigation and adaptation but have to do with preserving and harnessing natural capital that are also becoming cheaper, more economical, or are simply better productivity enhancers – they create more value than the legacy incumbent economic paradigm.” The impact of companies and investments on biodiversity is often location-specific and here, technology goes hand-in-hand with providing asset-level data on who owns what and where. “If you know what assets are where and you can use relational databases to understand who owns those assets, you can monitor change to the soil, land use change, water issues and so on,” says Kaminker. “You can also monitor things in real time, for instance as a wildfire or flood occurs.” In other words, using geospatial intelligence as they relate to natural capital issues helps investors to either de-risk a position or engage with a company – but they don’t need to wait for perfect data sets to start with the obvious. “There’s no point in waiting for the perfect sets of data before you act,” says Peter Mennie, global head of ESG integration and research at Manulife Investment Management. “There’s things that we can do now, and you have to split biodiversity and think about what are the areas that we can tackle.” He adds: “Deforestation is primarily driven by commodities production – cattle products, soybean, palm oil, forestry products. You can see how to identify it and zoom in on companies that are having an impact there. “In the absence of clear, consistent data across all companies, we still have the ability to say: ‘We understand broadly what areas impact biodiversity and we can zoom in on those and try and make an impact in those areas.’ Then you can relate that back to the sectors you think are going to be the logical highest impact from that, and also the sectors that are most dependent on nature, too.” © 2021 funds global asia