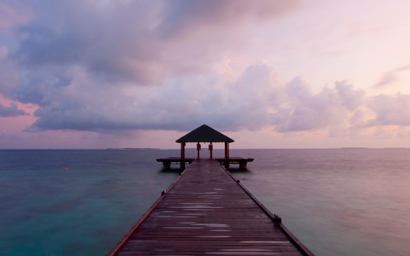 As one tax dispute is clarified in India, fund managers wonder if the next battle will be over the countryâs double taxation agreement with Mauritius. George Mitton reports.

Much of India’s tax system dates from the socialist period that followed independence in 1947. Since then, governments have sought to make the system more business-friendly by introducing exemptions, loopholes and other tax breaks. The result is a complex if not confusing system in which foreign companies sometimes find themselves slapped with unexpected bills.

This is what happened to Vodafone in 2012, when it was charged with more than $2 billion in back taxes (a demand the Indian Supreme Court later quashed). It happened again, to oil exploration firm Cairn India, in March 2015. The tax authorities say Cairn India, which is now owned by UK-based Vedanta Group, owes $3.6 billion for a transaction that occurred in 2006-07.

The good news is those foreign portfolio investors can relax – the government has stepped in to say they won’t have to pay backdated taxes. However, the episode has caused concern among many investors that the battle to define India’s tax rules isn’t over. There could yet be more conflict and more litigation, especially over the double taxation avoidance agreement with Mauritius that allows investors to avoid paying capital gains tax in India.Foreign portfolio investors have been hit too. In April 2015, it was reported than about 100 offshore funds had been given tax notices estimated at $5-6 billion for “untaxed gains” in previous years. One firm, Aberdeen Asset Management, took its case to the Bombay High Court.

ONE DOOR CLOSES
The recent tax notices sent to Aberdeen Asset Management and others concerned India’s minimum alternate tax (Mat) and an ambiguity in the law that made it unclear whether this tax was applicable to foreign portfolio investors or not (see box ‘Game, set and Mat?’).

The matter seems to have been settled thanks to an inquiry led by Justice AP Shah, which recommended that Mat not be applied to foreign portfolio investors.

“Providing certainty in tax law is the function of the government. The ambiguity required to be clarified, so we have done it,” said Indian finance minister Arun Jaitley at a press conference, adding that the government would amend the necessary law in the winter parliamentary session. 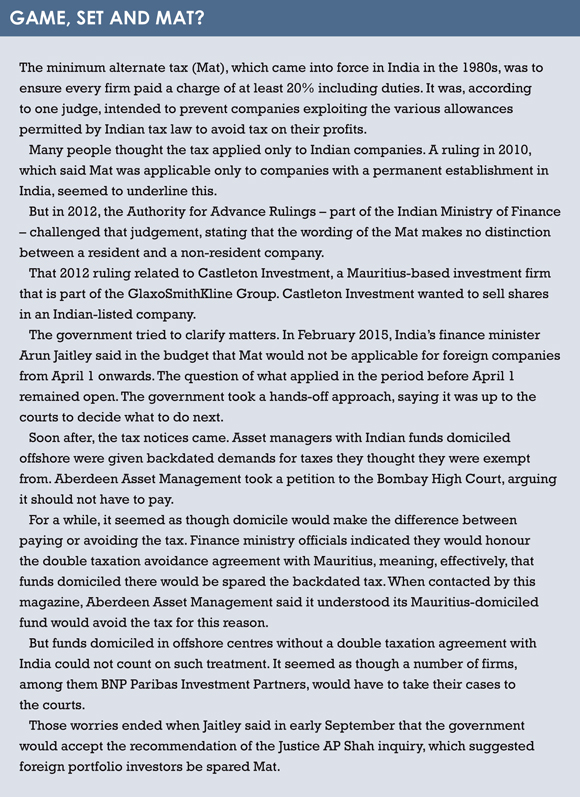 That’s that, then. Except that anyone who followed the case can see there are still unanswered questions with regards to India’s tax approach to foreign investors. The key one is over the status of Mauritius.

CLARIFICATION
Before continuing, it’s worth examining a positive step made earlier this year by the government of Narendra Modi, whose party, the Bharatiya Janata Party (BJP), was elected last year by a landslide. After campaigning on a pro-business platform and promising to do away with what his party called “tax terrorism”, Modi’s government made a welcome move to harmonise tax treatment for onshore and offshore investors in a set of new rules, effective as of April 2015.

“Modi has made it clear for stakeholders what India’s situation is,” says Ajay Tyagi, fund manager at UTI International, the global division of Indian asset manager UTI. “He has given a level playing field for foreign portfolio investors. There is clarity.”

The rules ought to end what had been a grey area in Indian tax law, in which foreign portfolio investors were sometimes taxed as if their capital gains were business income.

Now, they will pay short-term capital gains tax only, just the same as onshore funds.

So far, so good. Except, the problem with this situation is that many offshore Indian funds will not, in fact, pay tax on their short-term capital gains because they are domiciled in Mauritius, which has a longstanding double taxation avoidance agreement (DTAA) with India.

ABSOLUTE ZERO
The Mauritius DTAA dates back to 1983 and ensures that Mauritius-based entities that do business in India pay tax only in Mauritius. There is zero capital gains tax in Mauritius, which means foreign portfolio investors that domicile their India funds there can escape the tax entirely.

Naturally, asset managers have favoured the small island for domiciling India funds. So have all manner of investors into India. It has been estimated that 40% of India’s foreign direct investment comes in via Mauritius. (Singapore accounts for another sizeable chunk.)

The so-called Mauritius route is controversial, though. Not only is there aggravation in India that Mauritius-based entities are avoiding tax, there is a widespread belief that unscrupulous people are using Mauritius to channel their ill-gotten gains, or so-called ‘black money’.

It is frequently reported in the Indian press that some wealthy Indians use Mauritius to route black money back into the country. For its part, Mauritius insists it meets good standards on anti-money laundering and has its own unit, the Financial Intelligence Unit, to prevent this form of crime.

TIME TICKING
It seems clear the DTAA with Mauritius frustrates Modi’s efforts to provide a level playing field for foreign portfolio investors. As it stands, a fund domiciled in, say, Ireland will pay tax on short-term capital gains in India while a Mauritius-domiciled one will not.

How much longer will this imbalance exist? Tyagi, of UTI International, thinks not long. His firm decided to domicile its most recently launched fund in Dublin instead of Mauritius.

“It’s important for investors to understand that the Mauritius DTAA is under a lot of scrutiny,” he says. “After a couple of years, the Indian government may say the DTAA is too loose, has led to tax evasion, and ends the treaty.”

He adds: “Some investors will continue to come though Mauritius. It could take two, five or ten years, and, while the DTAA stays alive, they will not pay any tax, but this is a loophole that could be plugged some time in the future.”

There is good reason to think there may be some movement on the DTAA. Indian and Mauritian officials are reported to be in talks to renegotiate the treaty.

That said, they have been reported to be in talks for four to five years. It seems likely that something will happen, but no one is sure when.

COUNTER-AGGRESSION
Another law exists that could complicate matters: the General Anti-Avoidance Rule (GAAR). The GAAR was signed into law by the then finance minister, Pranab Mukherjee, on March 16, 2012. The government at the time wanted a law to help it claw back what it said was lost tax revenue. It was signed into law only two months after Vodafone won its bid to avoid a tax bill of $2 billion.

The GAAR was designed to counter aggressive tax avoidance schemes. It allows tax officials to deny tax benefits if a deal is found to have taken place without commercial purpose other than tax avoidance. The GAAR also allows officials to deny the benefits of tax treaties if they are being used to avoid taxes – a highly relevant fact for Mauritius-based funds.

It is a powerful piece of legislation, albeit one that has been criticised in some quarters for being anti-business and in others for containing ambiguities. The catch is that the GAAR has been repeatedly postponed since it was first introduced. In his budget presentation this year, Jaitley, the finance minster, postponed it again, until 2017.

It is possible that the GAAR will be put off once more, perhaps even delayed indefinitely by politicians nervous of harming India’s economy. But fund managers cannot assume this. Some Mauritius-based funds may soon need to justify their choice of domicile to avoid being hit by taxes.

How would a tax demand work under the GAAR? “The tax authorities will have to establish the reason for coming through Mauritius was to gain tax benefits – that there was no commercial justification,” says Pritin Kumar, a partner at Deloitte Haskins and Sells. The authorities may try to prove the Mauritius-based entity was a brass-plate-type organisation and not, say, a genuine commercial outfit employing staff. Deciding on these cases will be a job for the courts.

“There will definitely be some litigation going forward in relation to the GAAR,” says Kumar. “That is expected.”

He adds that the GAAR may encourage some asset managers to consider domiciling their funds away from Mauritius. If they cannot claim they chose to domicile in Mauritius for commercial reasons, they may be liable for a tax bill that would wipe out any benefits gained under the DTAA.

Kumar says the GAAR would almost certainly be forward-looking. “Existing investments would be grandfathered,” he says. Nevertheless, the law could be highly effective at increasing Indian tax revenues.

GLOBAL EFFORTS
One of the reasons given for delaying the GAAR is that India is working with the Organisation for Economic Co-operation and Development (OECD) on a project to tackle base erosion and profit shifting (BEPS), which refers to the effect of tax avoidance strategies by multinational organisations.

For India, the key part of the BEPS action plan is point six, which is designed to tackle treaty abuse. According to the draft, the OECD wants to include anti-abuse rules in tax treaties to prevent persons or funds exploiting treaties to avoid tax.

“India is an active participant in these discussions,” says Kumar. “India would like to align its GAAR with point six of BEPS.”

It is unclear how and when the GAAR will be synchronised with BEPS. There is always the chance that any decision will be delayed. Having complained about “tax terrorism” in his campaign, Modi will not want to be associated with an initiative that is seen as a tax grab. That said, the thinking behind the BEPS project betrays more than a hint of common sense, and in a world still recovering from the financial crisis of 2008-09, there is significant political will behind the project to clean up global tax standards.

Asset managers would be wise to monitor the Mauritius DTAA. Perhaps a renegotiated version of the treaty will not be so generous to offshore funds.