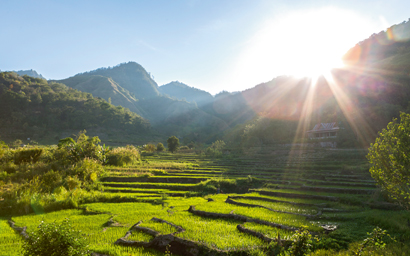 Indonesia is on a drive to enthuse its citizens about Islamic finance, but the country has a long way to go before it matches its neighbour, Malaysia. Dave Waller reports.

Western economies aren’t exactly in fine fettle these days. No surprise then that there’s a desire to tap into alternatives, not least the vast streams of wealth generated by the rich nations of the Middle East. Indeed, the smart money may well be on Islamic finance. The sharia-compliant economic model eschews the payment of interest and other staples of Western finance that may otherwise keep certain swathes of investor from participating. And it’s flourishing. Global assets in Islamic finance are worth around $1.5 trillion.

Of course, there’s plenty of movement in Islamic finance beyond the Gulf States. Last year was a bumper year for sukuk – the sharia equivalent to bonds. South Africa launched its first one, while Luxembourg issued the first to be denominated in euros. All positive signs. Yet when the country with the world’s largest Muslim population announces it has plans to expand its Islamic finance industry, it may be especially attention-worthy.

Indonesia is a natural fit for Islamic finance. Not only does it have the world’s largest Muslim population, but more than half of its people still don’t have a bank account (while the World Bank says the world’s ‘unbanked’ population shrank 20 percent from 2011-2014). Indonesia’s currency was also among the worst hit by last year’s emerging market sell-off in the US Federal Reserve’s tapering program, so alternatives must be appealing. And it seems a good fit for sukuk, the sharia-compliant equivalent to bonds. Instead of interest, each investor receives a share of ownership in the project funded from the sukuk money and is entitled to a share of income from that project. Thanks to their asset-based nature, sukuk are well-suited to infrastructure projects. As a developing nation, these will be key to Indonesian investment in the coming years.

HEAD START
Yet Indonesia has a very long way to go if it wants to build an industry that befits the religious leanings of its population. For a look at just how far, consider Malaysia, the leader in Islamic finance beyond the GCC. While Indonesia had only 272 trillion rupiah ($20.4 billion) in Islamic finance assets in 2014, according to its Financial Services Authority (OJK), Malaysia had 625 billion ringgit ($164 billion).

“That’s quite a head start,” says Simon Chen, senior analyst at Moody’s and the author of a report into Indonesia’s Islamic finance initiatives. “Indonesia may be the largest Muslim nation in terms of population, but it doesn’t have a state religion. It’s officially secular. Meanwhile, Malaysia has declared Islam its state religion and has made a concerted effort to develop Islamic finance in the country for 15-20 years.”

It may be a couple of decades behind, but that hasn’t stopped Indonesia making that effort now. In May, its government announced it was creating an Islamic finance roadmap, through which the country would attempt to build a credible domestic Islamic finance industry of its own.

The roadmap aims to build consolidation among smaller Islamic banks and Indonesian state-owned banks, in an attempt to increase the size of the banks’ capital bases and improve cost efficiencies and profitability, making Islamic finance even more appealing to investors.

The country is also bidding against Turkey to host the World Islamic Infrastructure Bank. The body, a joint creation of Indonesia and Turkey together with Saudi Arabia’s Islamic Development Bank, is designed to use sukuk to fund sharia-compliant infrastructure projects in Muslim-majority countries around the world. Indonesia’s Ministry of Finance has stated its aim that its Islamic finance “can be competitive and Indonesia can become an Islamic finance hub”.

It’s certainly stated its case very clearly. Last May, the government sold $2 billion-worth of sukuk with a tenor of 10 years, the world’s largest ever single-tranche sukuk offering. It generated demand from 240 investors from around the world. It has also thrown its weight behind education, with president Joko Widodo backing a national campaign called ‘I Love Sharia Finance’ in cities across Indonesia, in which sharia finance organisations advertised and explained the benefits of their banking, stock exchange and savings products. It even broke the national record for the longest banner – with one sign proclaiming the benefits of Islamic finance for a full kilometre.

DISAPPOINTMENT
These are all sensible steps, but it’s still very early days for Indonesia. Despite growth rates in excess of 33% a year since 2005, the Islamic banking sector still accounts for only 4.6% of the country’s banking assets (compared with a 20%-50% penetration rate in Malaysia and the Gulf countries). The OJK has expressed its own disappointment at the low growth rate of sharia finance in Indonesia, identifying two key problems: people’s low level of understanding (even with a 1km-long banner) and the slow growth of the national economy in the first quarter of 2015.

“A level of acceptance and education is still needed for Islamic finance to grow in Indonesia,” says Chen. “In Malaysia they’re already there. Indonesia has been talking about this for a couple of years now, but it was only a few months ago that we saw more media reports on the government’s roadmap for Islamic finance.

“If you compare Indonesia to Malaysia, the Malaysian government has given lots of incentives to banks and corporations to be involved in Islamic finance – including a concrete tax advantage for capital market participants to issue sukuk. But no one knows exactly what the Indonesian government is planning to do with its roadmap. It’s still very speculative at this stage.”

Indonesia has, however, made some great strides, levelling tax laws for transactions in Islamic finance, for example, and developing human resource in the discipline, introducing a development program to train professionals. Infrastructure projects represent the next logical step – but it will need to do much more to encourage both banks and corporations to get involved.

POLITICAL WILL
One key lesson from Malaysia is that the Malaysian government has adopted sharia-compliant instruments for much of its funding needs, so the government itself is providing much of the demand that boosts the growth of the sector. Yet there’s no reason Indonesia won’t get to that point too.

“It all came from the Malaysian government,” says Chen. “If we see that type of political will in Indonesia, it is possible that within five to 10 years you’ll see it happening.”

Yet one area that needs improvement in the near-term is the domestic take-up of sukuk. The demand isn’t there yet. Large institutional investors aren’t yet buying into them as investment vehicles, even thought the Indonesian government would surely say they’re the perfect fit.

Malaysia’s sukuk market, meanwhile, is the largest and most liquid globally, with a deep institutional investor base. It also took three decades to establish. It has really flourished in the past 10 years, thanks to the kind of co-ordinated government support that Indonesia is only now proposing. The advantage for Indonesia is, of course, that it can learn from Malaysia’s efforts and potentially grow more quickly.

So while Indonesia won’t represent serious competition for Malaysia’s Islamic finance any time soon, there’s no reason why it can’t make strides in the longer term. Bank Indonesia expects one in five Indonesian banks to be sharia-compliant by 2020. And there are signs that it’s already working. Abu Dhabi Islamic Bank said it was considering entering the market as part of its acquisition plans for 2016, alongside Bahrain’s Al Baraka Banking Group and Dubai Islamic Bank.

As Malaysia’s own example shows, if there’s the political will, and the dedication, then there is definitely a way.