INVESTING IN CHINA: Worth taking a risk?

Alibaba has investors around the world buzzing, many of whom are unaware of the regulatory, shareholder and operational risks posed by the set up of Chinese internet companies. Stefanie Eschenbacher investigates the variable equity interest structure.

The risks of investing in Chinese internet companies such as Alibaba are described in painstaking detail in prospectuses, and, if taken seriously, accounting expert Paul Gillis says they are terrifying.

Freedom of information, speech and the press are tightly controlled by the Chinese government, and foreign investors with an ability to influence these sectors are not welcome.

“Investors are told that this is China, and this is how things are done here,” says Gillis.

“This creates the impression that those are boilerplates, but all the risks laid out in these prospectuses are real and the problems have occurred,” comments Gillis.

Ahead of the listing of Hangzhou-based Alibaba on the New York Stock Exchange, the US-China Economic and Security Review Commission published a shuddering report undertaken on the structure.

The commission warns that VIEs are a “complex and highly risky mechanism”, which, although legal in the US, can be considered illegal in China.

VIEs are created via a set of complex legal contracts and usually based in the Cayman Islands, Delaware or the British Virgin Islands – but enforceable only in China, where the rule of law remains rudimentary.

These contracts are established on the premise of circumventing current Chinese government regulations and the commission warns that Chinese courts should not be relied upon to uphold these contracts.

The commission says there is a major risk that the Chinese shareholder of the VIE will “steal” the entity and ignore the legal arrangements on which the system is based.

There is no evidence of legal precedence where Chinese judges have honoured these contracts; in the 14 years since the first VIE was established, the structure has not been declared illegal, either.

The most high-profile scandal involved Alibaba itself, when its founder Jack Ma took Alipay out of the VIE structure without approval of majority shareholders. This led to a shareholder dispute with Yahoo!, one of the early investors, which owns 24% of Alibaba.

Alibaba had developed this online payment tool, similar to PayPal, and the launch was expected to benefit Yahoo!.

Through the autonomy granted to Ma through the VIE, he was able to spin Alipay off as a separate company, owned by himself, even though it was developed with Alibaba resources and support from foreign investors.

Ma claimed he did this because of local restrictions.

The case was eventually settled, but it highlights the risks of using a VIE structure.

While sophisticated investors in China should be largely familiar with the structure, Gillis says the high-profile IPO of Alibaba will attract many new investors that are only just coming to terms with the risks.

Edwarde Webre, a partner at law firm Deacons in China, says even though the risks are clearly spelt out in prospectuses, many public investors may not be fully aware of what they are investing their money in.

Webre says most public investors are probably under the impression that they are buying stocks or bonds in the ultimate entity that operates the business in China, rather than an offshore company that merely has contractual rights.

“The risks are clearly spelt out in the disclosure documents, but whether public investors fully understand the risks is a different question,” Webre says. 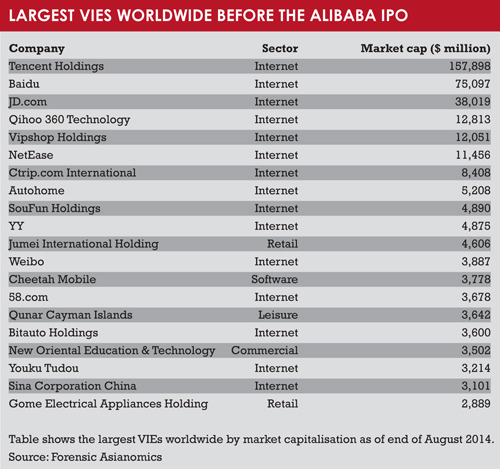 The Securities Exchange Commission’s Form F-1 filing by Alibaba, for example, states: “If the PRC government deems that the contractual arrangements in relation to our variable interest entities do not comply with PRC governmental restrictions on foreign investment, or if these regulations or the interpretation of existing regulation changes in the future, we could be subject to penalties or be forced to relinquish our interests in those operations.”

Chinese authorities are aware of the structure, and have been so for many years.

“The legality of the VIE structure is not clear, and in China there is a somewhat inconsistent enforcement of regulations,” Webre adds.

“It is certainly possible that the government may decide to crack down on these structures and declares them illegal, but we have no indication that this is going to happen.”

State-owned company China Unicom, for example, used a similar structure to roll out its telecommunication infrastructure in China during the 1990s. 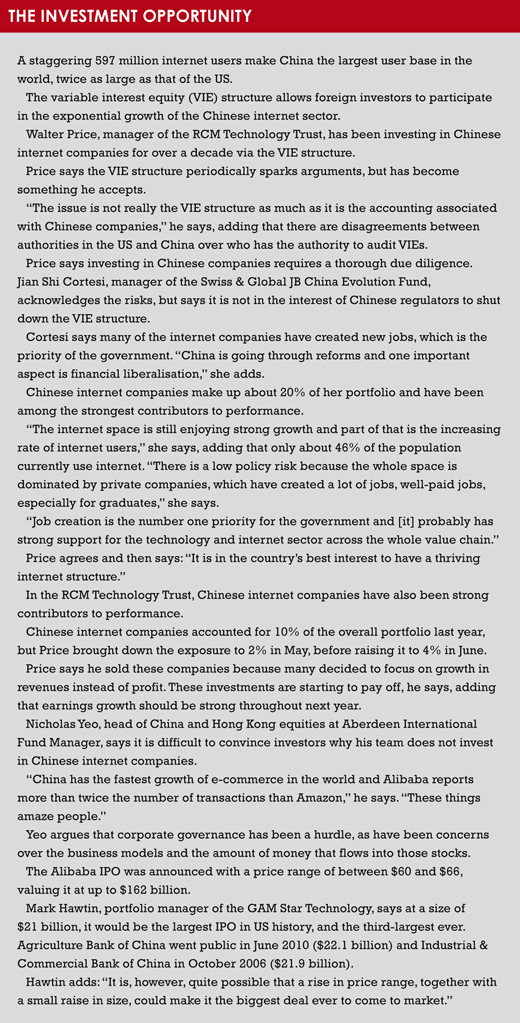 These entities existed for a number of years, and attracted many large, foreign investors until the Chinese government declared that they violated national policies restricting foreign investment in the telecommunications sector and required their dissolution.

“Everyone had to unwind their investments,” Webre recalls. “Today, it appears that investment restrictions are being relaxed and this type of entity may be allowed.”

Webre says there is also a possibility that VIEs will be unwound when foreign investors are allowed to directly invest in Chinese internet companies.

The domestic companies that set up VIEs do so because they are unable to get funding from other sources in China, and Webre says these structures have helped the country to build its internet industry.

R.J. Hottovy, a consumer equity strategist at Morningstar in the US, says that even large US companies – such as Expedia, TripAdvisor and Amazon – operate their subsidiaries in China under a VIE structure.

Neither Google nor eBay use VIE structures, but Hottovy says the fact that some large US companies use them gives the market more comfort.

Hottovy says the most likely outcome is that the government puts more rigour behind the structure itself as opposed to outlaw the structure.

Gillis shares this line and he goes on to say: “What will happen is that the government will introduce reforms that will make the VIE structure obsolete.”

Reforms have already been promised for the internet sector, along with e-commerce and education, during the Third Plenum Meeting by the Chinese Communist Party last year, but there have been few specifics.

If those rules are sufficiently liberalised to allow direct investment, Gillis says it is likely it will move towards wholly owned foreign enterprises that are actually owned by the foreign listed companies.

“That would be a big win for foreign investors and it would bring everything under Chinese regulation,” he adds.

China may also embrace the dual share class structure that is so popular with US technology companies and Chinese companies listed in the US, whereby share price ownership does not equate voting rights in the company.

Alibaba had put pressure on the Hong Kong Stock Exchange and the Securities and Futures Commission to create such a preferential stock structure, which is currently neither in Hong Kong nor in China prevalent, but regulators refused.

In a statement announcing its intention to list on the New York Stock Exchange instead, Alibaba says it respects the viewpoints and policies in Hong Kong.

“We will continue to pay close attention to and support the process of innovation and development of Hong Kong,” the statement says.

(Read: “Allow us a preferential stock structure, and we will consider listing in Hong Kong.”)

Alibaba currently controls about 80% of the e-commerce business in China, and its decision was a huge blow to the Hong Kong Stock Exchange.

“The Hong Kong Stock Exchange is under immense pressure to reconsider that rule,” says Gillis.

“Whatever solution China comes up with, Hong Kong will have to adapt to that.”