Style guides for journalists dictate that acronyms should be used sparingly. “Avoid spattering the page with capital letters”, one bestselling guide to English usage urges, explaining that otherwise the article will end up “irritating” readers.

When covering Asia, however, it is difficult to avoid them.

The QDLP programme is intended to allow foreign hedge fund managers to raise renminbi in China, convert it, and invest it abroad. Domestic investors can exchange renminbi into foreign currencies and channel it into hedge funds investing in offshore capital markets.

A pilot scheme is expected to launch in Shanghai soon. Although details have yet to be confirmed, it is expected that only top-notch overseas hedge funds managing assets over $10 billion will qualify.

The quota for the QDLP programme has been estimated at up to $5 billion; how much each hedge fund gets depends on the fund-raising capabilities in China; and a connecting fund would have to be set up in China to feed into the concerned overseas hedge fund. It is also expected that the same service group needs to administer onshore and offshore funds.

Fanny Wong, head of custody at Bank of China (Hong Kong), says given this structure it is not surprising that there is the need for a local bank to be overall responsible for the housing of administration, custody and reporting to regulators.

“It is on the radar screen of local custodians which possess ready capabilities,” she says, but highlights that it is still a pilot programme with unknown scale.

HSBC Securities Services China has established an onshore fund services team in December last year under what it says is “a long-term strategy to explore developing opportunities in fund administration and custody services”.

Andy Ng, head of HSBC Securities Services, China, says: “QDLP is one of the business opportunities we have been working on.”

HSBC Securities Services is also one of the custodian banks invited by the local regulator to participate in the pilot run of the QDLP scheme.

“We do not have an onshore fund administration capability in China, but we are looking at that,” he says.

So far, his focus is primarily on Hong Kong, Singapore and Japan. Elsewhere in Asia, the business is also growing in China and Australia. “We follow Korea and, to a lesser extent, India,” adds Gordon. “This may change in time, but there is no immediate opportunity.” 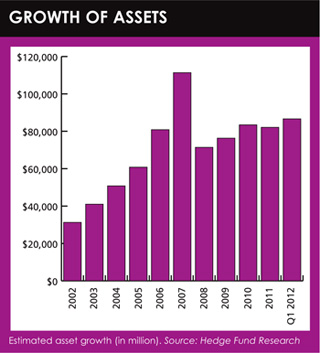 Citi has already been working to establish local fund administration services in China. Mike Sleightholme, global head of hedge fund services, says the QDLP programme “is accelerating that process” and will increase the focus on also offering these services to onshore hedge funds.

Vanilla administration
“There are many [other hedge fund administrators] but whether they have the scale and presence is of question,” says Sleightholme. “For a company that has no presence, it is hard to say whether this is really viable.”

Sought-after services in Asia include prime custody and middle-office services to alternative investment managers, as well as fund administration. “Until quite recently, there was a focus on much more vanilla administration,” he says. “Now there is a much broader set of services requested.”

The Asian hedge fund industry experienced a solid year, despite a difficult fundraising environment everywhere else.

According to data by Hedge Fund Research, Asia-focused hedge funds grew from $82.1 billion to $86.7 billion from the end of last year until the first quarter of this year.

Redemptions were not as high as previously feared and allocations to Asian managers started to pick up towards the end of the year.

While most hedge funds will need at least $500 million of assets under management to be economically viable, Sleightholme says this is somewhat lower in Asia.

Gordon says the industry remains immature and there is an “intense focus” on fees. “Funds are smaller so we have more discussions about fees then elsewhere,” he says, adding that “cutting costs in one part of the world” could damage BNY Mellon’s reputation globally.

Sleightholme says Citi has been dealing with similar issues, pointing to the fact that hedge fund managers are not immune to fee compression.

Cost is becoming an issue, partly because of regulation. “With investors also looking at reduction in fees alongside regulatory changes, these are all factors driving efficiency,”
he adds.

Though asset servicing providers concede that there are challenges when dealing with regulation, valuations and establishing net asset values, they say the growth potential is big in Asia. “Five years ago, the biggest managers of Asian alternatives were sitting in New York or London,” says Gordon. “Now they are moving to Asia.”