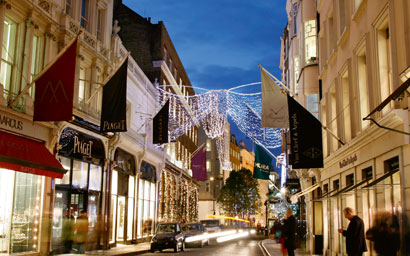 Loans and sovereign bond benchmarks that reference the GDP of issuers are part of the toolset for targeting new income sources. Funds Europe was media partner at Pioneer Investmentsâ annual conference.

Ranked in order of severity, the gaps in portfolios that professional fund selectors face are higher returns, sources of income, protection against losses and ways to reduce volatility, a recent poll of 180 fund distributors found.

The fund buyers, including representatives from Latin America, were questioned at the annual investor conference of Pioneer Investments (see ‘Portfolio gaps’ opposite).

The top two challenges – growth and income – have been key concerns for investors for several years. What has changed notably in recent months, though, is the global environment in which investors face down these problems. 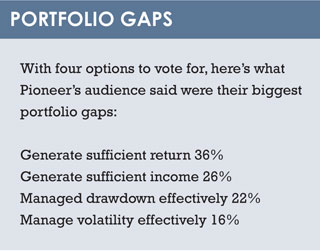 A backdrop of uncertainty still exists and it is difficult for economies to find growth – yet the US recovery has occurred, essentially, and this year and next are likely to be characterised by the after-effects of quantitative easing (QE), the tool that saved America’s economy. Higher interest rates – or rate normalisation – are expected in the US as inflation sets in.

Ken Taubes, Pioneer’s head of investment management in the US, notes that a better employment situation, coupled with growth and inflation, means it is more likely that the Federal Reserve will lift rates in the near future.

“Conditions in the US suggest tighter monetary policy is coming soon,” he said. He noted also that it is nine years since America’s central bank last raised its rates.

Meanwhile, emerging markets – which in many ways benefited from American QE – are cyclically out of favour, even though long-term fundamentals support the “swinging pendulum” thesis of recent years. This describes the shift of wealth from developed markets to emerging economies over time and partly explained soaring assets there.

Meanwhile Europe, whose Eurozone members have seen their severest economic struggle since the end of the Second World War, is experiencing huge investor interest in equities as the European Central Bank embarks on its own QE programme.

In short, the world has virtually spun on a dime in the past 24 months, triggering major geopolitical uncertainty.

At April’s conference in Boston, Massachusetts, the two sentiments that united Pioneer’s numerous portfolio managers and strategists were pessimism for the broad fixed income outlook and optimism for European equities (and Europe generally).

New income sources
Giordano Lombardo, Pioneer’s chief executive, says that for investors, income continues to be the key need. Moreover, with fixed interest returns so low, the crucial mission is to identify new sources of income – the theme of the three-day conference. 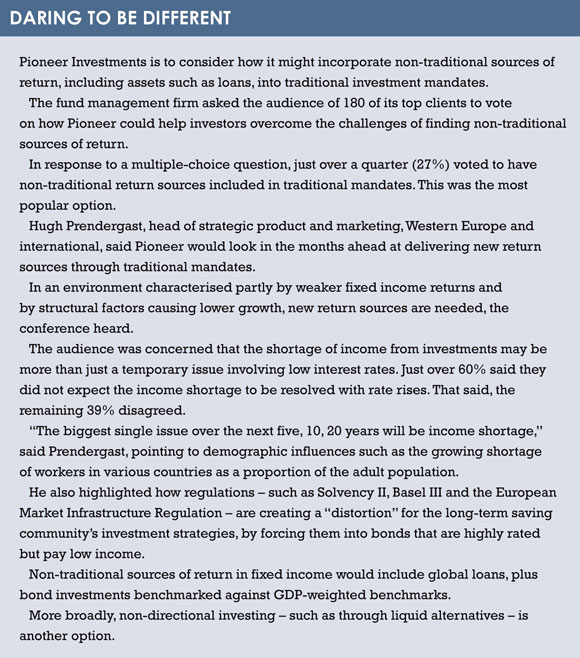 In addition, equity dividends still have a role. Piergaetano Iaccarino, head of thematic and disciplined equity, noted that US dividend stocks had re-rated, mostly because of the Fed’s QE programme.

Similarly, Europe’s own programme could lift ratings of Eurozone income stocks, he said.

Dividend yields have been stable in the past two or three years and companies – flushed with cash but lacking anywhere to invest it – want to please investors by giving it to them instead, Iaccarino says.

At the same time, the Japanese dividend story is still running.

Karl Huber, senior portfolio manager (Europe), is overweight on banks and cyclicals in dividend season. He is targeting a 7% income, which he accepts is ambitious, but uses high-yield equities and a call option process to enhance yield.

REAL PROGRESS
For now, though, the emphasis is on European equities, the conference’s stars. Following years of worry about the very future of the Eurozone, the region – according to Andrew Arbuthnott, head of European large-cap equity – shows up better than Japan, the UK and the US on a debt-to-GDP measure.

“A lot of peripheral countries have made real, substantial progress in turning current account deficits into reasonable surpluses,” he says.

But, he adds, the seasonal pattern may mean less strong stock markets in the second quarter, and factors such as Spain’s elections could cause consolidation.