Private equity managers are increasingly seeking majority control of their investments and are pursuing a wider range of exit strategies. Stefanie Eschenbacher finds out why.

Private equity investors are becoming more assertive in the way they approach investments in Asia, increasingly taking majority control and exploring exit strategies such as trade sales, redemptions and selling to peers.

Lacklustre market conditions have made Asia a tough region for private equity investors so they are changing their tactics in order to succeed.

Data from Preqin shows that there has been a trend towards majority-control deals, although minority deals are still a lot more common. The percentage of majority control deals has risen to 22% year-to-date, up from 17% in 2008. 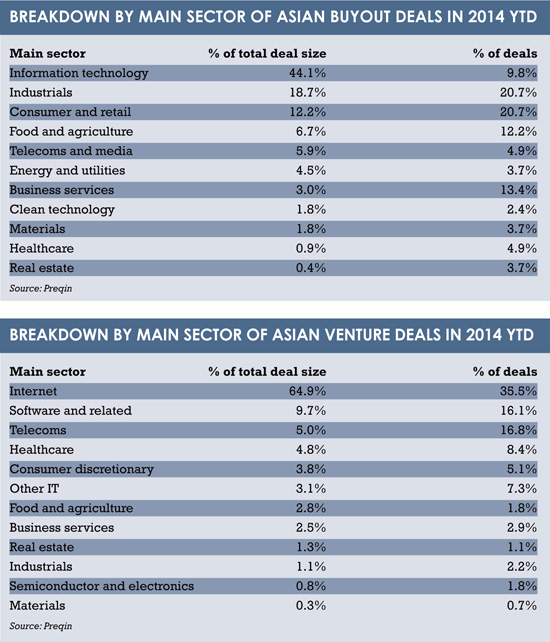 “This was the largest deal we have ever done, and it was a controlled deal, which is rare in India,” comments Jean Eric Salata, founding partner and chief executive officer, Baring Private Equity.

“We are seeing more opportunities to do majority-control deals in the region, largely driven by the generational change.”

TIGHT CREDIT
Many entrepreneurs have reached retirement age, but have no successor; or they have grown their businesses to a size that requires a professional management team.

“They face a challenging combination of having to scale up the business amid slowing economic growth and tight credit conditions,” Salata says. “The complexity they face is such that they are more open to selling to multi-nationals or to private equity investors.” Lunar Capital in Shanghai does almost exclusively majority-control buyout deals in China, based on the assumption that many Chinese middle market companies struggle to identify and retain the professional management necessary to scale.

YR Cheng, a partner at Lunar Capital, says 90% of its recent investments have been majority-control buyout deals.

The private equity investor recruits the chief executive officer and chief financial officer to help with the due diligence before the deal closes, and appoints them upon deal closing.  “Once we have control of a company and put an expert in, we can build a better business – one that is more transparent, more efficient and more disciplined,” Cheng says.

“One of the reasons they decide to work with us is that we bring opportunities; we upgrade their product offering and distribution, improve supply chain and build discipline,” he adds.

Lunar Capital focuses on medium-sized consumer companies, particularly in the central and western regions of China, that already have a strong local presence and the potential to broaden their reach to a bigger market.

One of its recent deals is the acquisition of Guizhou Yonghong Food, which was completed in April last year. Following succession issues, it is now led by Eric Yiming, a member of Cheng’s operations and portfolio management team.

The team took over the management of the business and works closely with the three co-founders of Guizhou Yonghong Food, who retain a substantial minority stake.

Echoing the comments of Salata at Baring Private Equity Asia, Cheng says the generational change in Asia is providing opportunities for a number of private equity investors.

“The consumer segment is hard work,” Cheng says. “Not everyone will want to inherit this business, which is a good opportunity for a mid-sized buyout.”

Private equity investors in Asia are increasingly pursuing exit strategies other than going public because they are disillusioned with initial public offerings (IPOs). Perhaps the biggest disappointment of the IPO market has been Alibaba’s decision to list in New York instead of Hong Kong in what could potentially be the largest ever public offering of a private company.

IPO SLOWDOWN
The Chinese e-commerce giant, often described as eBay, PayPal and Amazon rolled into one, demanded the Hong Kong Stock Exchange adapts its rules, violating an existing “one shareholder, one vote” rule, which the exchange refused. 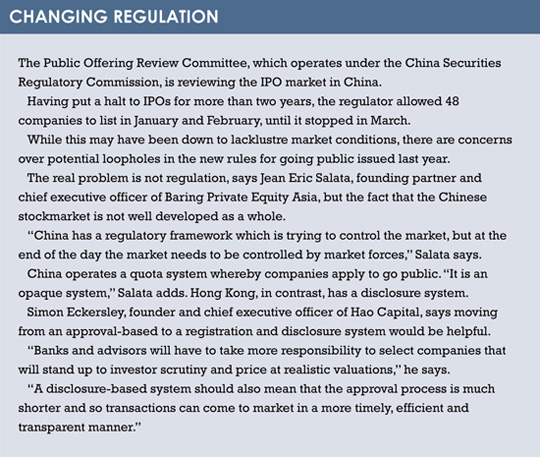 Data from Renaissance Capital shows that the Asian IPO Market as a whole has been weak so far this year: the FTSE Renaissance Asia Pacific IPO Index lost 4.5% year-to-date.

“Asian companies that have made it to the market have not fared much better.”

Preqin says that 43.8% of buyout deals in Asia have been through trade sales year-to-date, and 41.4% of venture deals.

Baring Private Equity Asia completed between 80% and 90% of its exits last year through trade sales, up from 50% in previous years.

In its most recent buyout deal it sold 100% of Net Japan to Orix, but the financial details were not released.

Simon Eckersley, founder and chief executive officer of Hao Capital, a China-focused private equity investor, says in addition to trade sales, redemptions and sales to other private equity investors have been popular. Some private equity firms have had to utilise fund life extensions to give their portfolio more time to achieve exits through IPOs as
a result of the slow primary market, and in the absence of other opportunities. 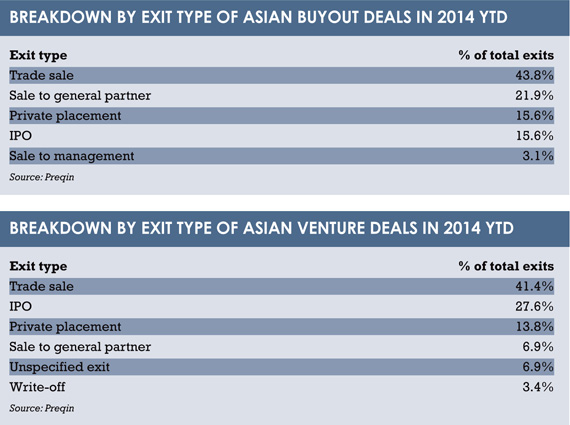 Eckersley says it can take at least one or two years after the IPO for a private equity firm to actually complete an exit process, which is subject to any lock-up provisions imposed by regulators and other parties.

“This means trade sales, redemptions and sales of minority positions to other private equity firms are actually quite attractive as they can represent a full exit from the underlying portfolio company.”

While IPOs are still a significant part of the industry, Salata says the aim is to build a more balanced portfolio of a range of strategies. Markets in Asia are cyclical, and sometimes cycles are deep.

“These markets are driven by global investor sentiment, and capital inflows and outflows,” Salata says.

“Markets will turn, but we regularly look to make realisations for our investors because the markets are cyclical and we need to make sure we act quickly.”