CHINA BONDS: The sheepdogs are idle 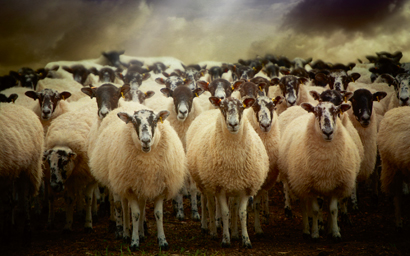 Keep a herd of sheep in a pen for a week and open the gate. You’d think the animals would escape, but they’re as likely to stand at the gateway, hesitating. Accustomed to the barrier, they struggle to adjust to its absence.

Banks, pension funds, insurance companies and sovereign wealth funds are not really like sheep, but in this respect there is a similarity. When the Chinese central bank announced on February 24 that foreign institutional investors could now buy bonds on the onshore interbank market, and no longer face quota limits, most of them simply stood and watched.

You might have expected a rush of foreign capital. China’s onshore bond market is huge. Worth nearly $6 trillion, according to index provider S&P, it is the world’s third-largest bond market after the US and Japan.

Foreigners own only about 2% of onshore bonds. So, are they rushing in? Not yet. They will, in time. But first they are waiting, like sheep in a pen. How long until they move?

HYPERBOLE
The scale of China’s bond market is certainly exciting. “An unprecedented opportunity (hyperbole warranted) is knocking,” wrote Z-Ben Advisors, the Shanghai-based consultancy. It noted that no foreign firm has yet asserted a strong competitive claim in China’s onshore bond market, 90% of which is interbank. Given the growing importance of China’s capital markets, the consultancy argues that foreign firms, including asset managers and custodians, should act right away. Any delay, it said, could be a “costly mistake”.

Some asset managers are galvanised by the opportunity. Jan Dehn of Ashmore, a specialist emerging markets investment firm, has been proselytising for investment in China for some time. Chinese government bonds offer better rewards compared to risk than bonds in other major global reserve currencies, he says. They are backed by an economy that is growing faster than any developed market with far less central government debt. It is only because of “a combination of prejudice, ignorance and overly conservative and inflexible investment practices”, he argues, that most institutional investors lack meaningful onshore exposure in China.

Why aren’t investors rushing in? One reason is that index providers have yet to endorse China’s onshore bond market by including it in global indices. Investors who allocate money according to benchmark indices such as the Citi World Government Bond Index are unlikely to start buying Chinese bonds in any number until Citigroup adds China to its index. To extend the earlier analogy, if China’s central bank is the farmer who opens the gate, the index providers are sheepdogs that force the flock to move.

For those who are bullish on China, it must seem as though the index providers are preventing Chinese investment by standing idle. Dehn takes a cynical tone by writing, “King Canute famously did not succeed in holding back the tide; neither will the index providers.”

CAUTION
But is it fair to imply index providers are deliberately blocking inflows into Chinese bonds? Citigroup responded to the People’s Bank of China announcement with a statement that said it welcomed the policy. “The changes, which are effective immediately, aim to remove quota cap and to simplify the filing process for [institutional] investors,” said the statement. The firm said it would continue to “monitor market developments” before deciding on an inclusion into the World Government Bond Index. In the meantime, it highlighted that investors who want to access Chinese onshore bonds today can use its single-country China index.

Citigroup’s cautious tone was mirrored by the providers of two other major fixed income indices, the JPMorgan Global Bond Index-Emerging Market and the Barclays Global Aggregate Index, neither of which have chosen to add Chinese interbank bonds to their indices yet.

In fairness, index providers have to strike a balance. If they are slow to act, they are accused of holding back investment flows. But act too quickly, and they risk causing market dislocations. The new, open access to China’s onshore bond market has yet to be tested. It is understandable that Citigroup and the others want to see the new, quota-free mechanisms in action before making index changes that could trigger billions of dollars of inflows.

It is also relevant that institutional investors are themselves the clients of the big index providers. If the providers have yet to add Chinese onshore bonds to their indices, it is a good bet that the large institutions themselves are not ready to allocate capital.

However, progress is being made over time, and it is notable that a similar process is under way regarding China’s equity market. Equity index compiler MSCI chose in 2015 not to add Chinese onshore-listed shares to its widely followed Emerging Markets index, citing market access concerns, but most commentators agree MSCI will be forced to act soon.

DIMSUM
Increasing inflows into China’s onshore bond market will affect other asset classes, notably offshore renminbi bonds, known as dimsum bonds. Until now, these bonds have enjoyed an advantage over bonds from onshore issuers because they were easier for foreigners to buy. Now that this is changing, and with the value of their outstanding issuance far less than the onshore market, dimsum bonds risk becoming an appetiser left unfinished.

The new freedom to invest directly in the onshore market might benefit another species of Chinese bond, though: panda bonds. These are bonds issued onshore in renminbi by overseas issuers. Now that foreign as well as onshore investors have better access to panda bonds, they could steal market share from dimsum bonds.

CURRENCY WOES
Of course, institutional investors may have their own reasons for holding back from investing in China’s onshore bond market, one reason being the widespread expectation that China’s central bank will devalue the renminbi.

“Short-term pressures on the currency are still strong and we expect the currency to remain a source of concern until the currency policy becomes clearer to market participants,” says Rajeev De Mello, head of Asian fixed income at Schroders.

Viewed in this light, China’s decision to open up its bond market is interesting, but not a spur to immediate action. After significant volatility in China’s equity market, and beneath the spectre of a currency devaluation, it may be rational for investors to hesitate.

This may explain why some analysts are predicting it will take some time before the recent easing of access to China’s onshore bond market leads to inflows.

“We think the expansion of market access could potentially open the door for Chinese renminbi bonds to be included in global indices, which can support the currency over the medium to long term,” says Aidan Yao, senior economist, and Jason Pang, portfolio manager, at Axa Investment Managers. “However, the near-term market implications (over the next three to six months) should be fairly limited.”