Macau gaming stocks have been defying the odds, with share prices growing almost four times as fast as the underlying earnings. Stefanie Eschenbacher asks if this can continue, as there has been no indication for how much longer casino licences will be renewed.

Uncertainty over the upcoming renewal of licences for Macau casinos has become the greatest concern for the sector, which has so far seen unprecedented stock price performance even as the odds had turned against it.

Even as the Chinese economy started to slow, and although credit supply began to tighten and the government cracked down on vice, gaming revenues surged almost 20% last year, compared to the previous year, to 360 million Macau patacas (€45 billion).

The former Portuguese colony is a special administration and the only place in China where gaming is legal; in recent years, its gaming sector has grown to a size seven times bigger than that of Las Vegas.

Choudhary says there is no other sector in the world where stocks see 30% earnings growth with a 4% dividend yield. “It does not exist,” he says. “It is just Macau.” 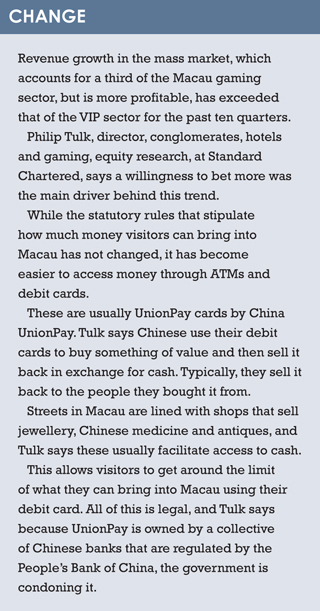 The problem with this analysis is that casino licences were initially given for two decades; they will expire between 2020 and 2022, and will be reviewed as early as next year.

Taking this into consideration, Choudhary says, these multiples appear in a completely different light.

Leon Liao, China equities analyst at Jefferies, says licence renewals have indeed resulted in discussions. He says it is not clear how long the new licence term will be, but probably shorter than two decades.

It is also still unclear if there will be only six licenced casino companies or more, but Liao says he is confident that there will be no new licences because SJM Holdings and Galaxy Entertainment already have the ability to licence third-party managed casinos.

BEHIND THE SCENES
Liao says Melco Crown paid $900 million for a one-time licence, but when SJM Holdings gave a third-party management licence to MGM China, MGM China only paid $200 million.

“There is no clear guidance,” Liao says. “The government does not say how many tables casinos can get, they only say that it depends on how many non-gaming facilities such as hotels and rooms they have.”

The process around licence renewals is not entirely transparent and none of the six casino operators were prepared to comment.

Nicholas Yeo, director and head of equities, China and Hong Kong, at Aberdeen International Fund Managers, says “there is a lot of lobbying behind the scenes” and that there is no way for investors to know how the licences are awarded.

Yeo is one of the few fund managers who could not be won over by Macau gaming stocks. He acknowledges the spectacular performance, calling a casino in Macau “a licence to print money”, but says there are governance issues when it comes to investing in these stocks.

“Dirty money in China is big business, given the prevalence of corruption,” Yao says. “We have already seen an anti-corruption drive by the government.”

Since Xi Xinping became president, he has been vocal about the fact that the Chinese government will clamp down on corruption.

The VIP gaming sector in Macau, which accounts for two-thirds of the market, but is less profitable than the mass market, is most vulnerable.

“After a year-and-a-half, nothing has happened,” Liao says. “Corruption continues and despite new measures being reinforced, the market in Macau continues to grow.”

Still, casinos have started to focus more on the mass market.

IMAGE
Will Wang, a director at Barclays, says reporting standards have increased in Macau in recent years, although he acknowledges that fraudulent money still exists.

“Cleaning up the image over the long term is a good thing for Macau to do,” he says, adding that fraudulent money is difficult to quantify.

The Chinese economy started to slow, credit supply began to tighten and the government cracked down on vice, Wang says another concern is that Macau might not be able to cope with growth.

“The only constraint for the development of Macau is that they are short of land,” he says. “There are only 29 square kilometers in the area and all the reclaimed land in Cotai has already been occupied by the six operators.”

Hotels on the peninsula have occupancy rates of up to 100% and casinos face labour shortages because only Macau residents can work as dealers.

The Guangzhou-Zhuhai intercity railway connects Macau and the development of the Hengqin island, where a hotel, an ocean resort and a circus will be built. Liao says the hotel will have 2,000 additional rooms and developers expect 20 million visitors a year.

In 2010, when the number of tables casino operators are allowed was capped, its operators did something unexpected to make up for fewer visitors: they raised the minimum bet to as high as $250. This compares to a minimum bet of $25 in Singapore and $5 in Las Vegas. 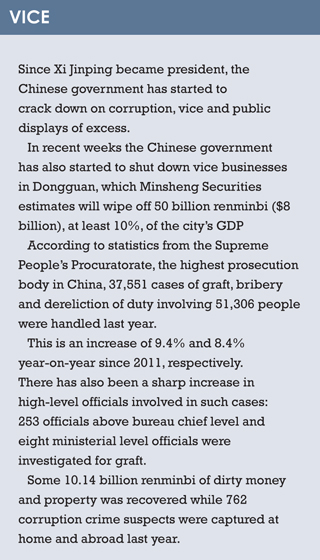 “If you had asked me a year ago, I would not have predicted that they would be able to go up so high,” Choudhary says. “If you go to the City of Dreams today, the minimum bet is $250. Can this go up to $300? I suppose it can.”

“This is something nobody really expected,” he says.

When investors sell a stock once it has started to fall, they are often left with the feeling of locking in a loss.

“We try hard to cut our losses quickly and let our winners run,” Davids says.

Because Macau gaming stocks have consistently beaten expectations, Davids says even at current valuations he has no plans to sell.

He says these stocks are trading at “unforgiving multiples” now.

“If someone is willing to pay double of what they were willing to pay 12 months ago, that suggests a measure of confidence, possibly complacency,” he says.

WINNERS
Melco Crown and Galaxy Entertainment are his largest active and longest-standing stocks, but he also owns Sands China. Davids allows his winners to run so active money builds up as the stocks perform well.

However, because he does not build up active positions of more than 1% in a single stock, he has had to trim Melco Crown and Galaxy.

Wang says some of the Macau gaming stocks have already exceeded the target prices set by analysts in his team.

He adds: “The key question is whether growth can still continue because higher multiples are only supported if earnings per share can continue to grow.”.

Philip Tulk, director, conglomerates, hotels and gaming, equity research, at Standard Chartered, says most investors would start to turn cautious on such valuations.

“The easy money has been made and now it is going to get harder.”