INSIDE VIEW: Rewarding shareholders with dividents

The Chinese regulator has stipulated minimum dividend payout ratios for listed companies. Leanna Lim of Markit says this will have a definite impact on the market.

Chinese authorities have made a concentrated effort in recent years to improve efficiency and reduce the barriers to foreign investment in a bid to push its stockmarket onto the global stage.

The China Securities Regulatory Commission has published guidelines to encourage listed companies to have clearer procedures for cash dividend-related issues.

CONSULTATION
Companies listed on the Shanghai Stock Exchange that distribute less than 30% of their profits will have to explain their use of cash as well as why they are paying out less than the recommended threshold.

The key to these regulatory guidelines on dividend payouts is by the regulator and the Shanghai Stock Exchange lies in improving transparency of the dividend decision-making process.

This increases accountability to shareholders and helps to achieve a level of certainty on dividend expectations. It is not a question of whether payout ratios will rise, but when they will rise and to what extent.

There are already visible efforts by a handful of companies for greater shareholder engagement.

Data for last year is not available yet, but aggregate dividends paid out by the constituents of China A50 are likely to have picked up pace after two years of slowing growth.
Some insurance and financial services companies in particular had been heavily battered in previous years.

We forecast dividend growth of 14.8% for last year and predict further growth of 5.6% for this year, in line with slowing projected GDP growth in China.

The China A 50 comprises the largest and most established companies in China. They may not be reflective of the whole market, but can be representative of the major dividend actions and trends across the broader market.

Based on our forecasts for this year and next, the average payout ratio of all 50 companies in the index is currently 30%, maintained from the previous year.

RETURN TO NORMALCY
As the macroenvironment stabilises, we expect that as earnings return to normalcy more or less, we can expect to see further rises in the average payout ratio, supported by sectors that are currently paying below the 30% recommended guideline.

The average payout ratio is expected to continue to vary among sectors.

Highly leveraged industries, such as construction, will continue to keep a higher level of profits with them. However, these sectors are likely to increase their commitment to return a greater proportion of its profits back to the shareholders. 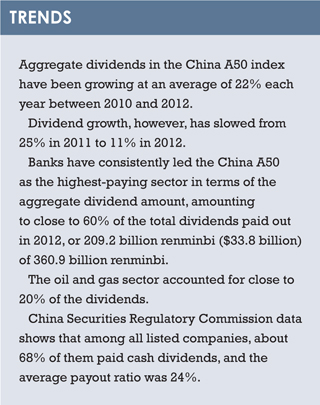 As the sectors accounting for the largest portion of the China A50 dividend pie – banks, and oil and gas companies – generally have a stable payout ratio in excess of 30%.

The big four state-owned banks have been paying 35% consistently since 2010, which was brought down from prior years in an effort to shore up capital, and we expect the ratio to be maintained rather than raised, in view of increasing regulatory constraints.

Meanwhile, there is moderate scope for slight dividend increases among the smaller regional banks, especially those currently still paying below 20% of profits.

Smaller regional banks have been paying out anywhere from 9% to a maximum of around 30%, with significant fluctuations.

PetroChina, the third and last oil and gas company in the index, has been paying consistently at 45% over the last five years.

Utilities companies are a high dividend payout sector. Historically, the payout ratio has been consistently above 50% and this is likely to remain at a similar level.

The insurance sector saw an unusual spike in payout ratio in 2012, as dividends were maintained amid an earnings downcycle.

There is room for higher payout ratios in the health care, personal and household goods and real estate sectors, given that these sectors are currently paying in the low 20% or below.

Chinese real estate developer, China Vanke, recently announced its intention to double the target dividend payout ratio from the 15% in past years to 30% effective this year.

The construction and materials sector is highly leveraged, and the dividend payout ratios in past years are consistent between 15% and 20%.

There are no indications of them increasing payout ratios significantly, but there is room for improvement.

Leanna Lim is a vice president, equities, at Markit