Regulatory reforms of over-the-counter derivatives trading are being finalised amid much debate. Muriel Oatham finds third-party providers are hoping new opportunities will arise.

Ambitious regulatory reforms, aiming to reduce risk in over-the-counter (OTC) derivatives trading, are being finalised amid much debate.

The uncertainty is such that, when approached for comment in late January, major derivatives providers HSBC and Standard Chartered both said they were unable to comment on the impact of regulatory change at the time.

But across the global market, third-party providers are looking for new opportunities arising from supporting the role of regulatory change.

One of these is Euroclear. Gaetan Gosset, director of product management at the bank’s Hong Kong branch, agrees that while regulatory requirements are currently “a moving target”, they offer various opportunities.

The first of these is in collateral management.

As more trades are cleared through central counterparties (CCPs), and require deposits to be placed, collateral usage is expected to increase. Overall demand for collateral is likely to increase as more providers require high-grade credit.

FLEXIBILITY
To enable the market to keep functioning, CCPs and central banks will have to broaden their criteria for acceptable collateral. But Gosset says this could require more sophisticated processes.

“Today, some 73% of transferred collateral is cash, which is generally seen as being easy to move and easy to price. But non-cash collateral is seen as more complex to manage.”

Gosset says financial institutions will increasingly demand to use their collateral more flexibly, and the practice of using different securities held in different places as collateral will increase. To make this simpler, he says we are likely to see more use of “general collateral baskets”.

Here, a CCP would define different types of eligible collateral. It could then allow its members the flexibility of substituting securities initially posted as collateral, depending on daily business activity.

He adds that this would remove the need for lengthy conversations about which types of collateral would be acceptable for particular trades.

Keith Noyes, regional director at the Asia-Pacific, International Swaps and Derivatives Association (ISDA), says one of the biggest impacts of the proposed regulatory change will be the requirement for mandatory initial margining.

RESTRICTIONS
At present, an initial margin is not required for swaps, which are not centrally cleared. Large sectors of the OTC derivatives market, including interest rate options, many single-name credit default swaps and currency swaps, are not clearable. ISDA says that central clearing may never be appropriate for some of these trades.

In a recent study, entitled Initial margin for non-centrally cleared swaps, it estimated the size of this market as to be $127 trillion. This means that the total initial margin, without threshold, required globally for these trades could range from $1.7 trillion to $10.2 trillion.

In addition, regulation could place restrictions on financial institutions’ ability to reuse the assets held as collateral against these trades in other parts of their business.

“If the ability to rehypothecate this collateral is limited, it could lead to end clients having to pay higher prices for their hedging transactions,” says Noyes.

Gosset agrees that the requirement for the buy-side entity to post-initial margin at CCPs will be significant: both in terms of needing to find and mobilise high-grade collateral available, and having the operational facility to do so.

To aim to meet this need, Euroclear launched its global “collateral highway” in July 2012. This allows market participants to track, source and mobilise their collateral inventories across time zones and different countries.

UNCERTAINTY
In Asia, Euroclear has entered into partnerships with the Hong Kong Monetary Authority (HKMA) and the Korea Securities Depository for collateral management, and is seeking to replicate this further throughout the continent. “The HKMA and Euroclear Bank managed the collateral needs for the first ever cross-border RMB repo transaction,” says Gosset.

Amid the current uncertainty, one area where global regulators have reached agreement is that CCPs should provide non-discriminatory access for exchanges and other trading platforms wanting to send them derivatives for clearing.

While this could force greater competition in clearing, it creates a dilemma for market participants. They face a choice between becoming direct members of one or more CCPs, which in turn could increase operating costs, or becoming a general clearing member via a third party provider.

DISTORTION
Noyes says while the market is currently dominated by a few CCPs, a number of new ones are coming online.

As central clearing is a volume and scale business, he says that assuming there are no regulatory restrictions, he would expect to see liquidity pool in a few CCPs which have achieved scale, with separate roles for several smaller niche market CCPs.

However, Noyes adds that in certain jurisdictions, some CCPs will gain volume due to local regulatory authorisation. “This will distort free market decisions on where to clear.”


Gosset anticipates increased competition across market infrastructures. But he adds that scope for this will be limited by regulation. “Markets will welcome CCPs competing on price and services, but not on risk management.”

He says that large CCPs would argue that the most desirable outcome for the market is to concentrate activities in a few large clearing houses.

“Major providers have lower margins. And the breadth of their business portfolios minimises the need to mobilise collateral across locations.”

Gosset says that the trading parties will decide which CCPs they use. But those traders who need to use multiple CCPs will see their back office and collateral management costs increase.

COMPETITION
Gosset and Noyes agree that the cost of meeting regulatory requirements may see more providers look to third-party solutions.

This is supported by a recent study, The outsourcing services landscape for investment managers, by research and advisory firm Aite Group. This surveyed a number of custodian outsourcing service providers and found that they were increasingly investing in regulation-specific initiatives to offer the asset management market.

“As regulation increasingly becomes a driver for outsourcing, it will also become an area for potential competition between outsource service providers,” says Lyn Marcrum, senior analyst at Aite Group.

She says regulation-driven services such as OTC derivatives routing to CCPs and reporting to trade repositories will become a key differentiator for outsource providers.

Marcrum adds that both custodian bank and non-bank providers of outsourcing services now have several decades of experience in areas that asset managers may be facing for the first time. And she says the use of global operating models by service providers means that location is becoming increasingly less relevant. 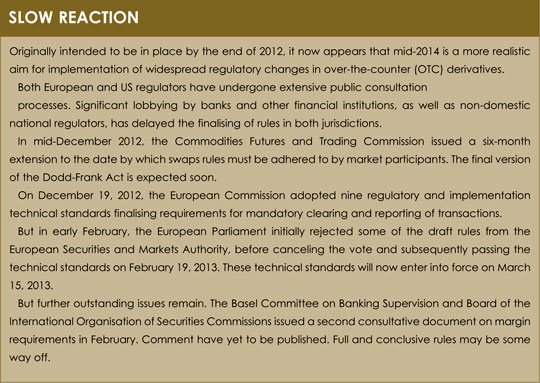 Noyes says that in the face of a demanding timeline for regulatory implementation, outsourcing could increase. “All firms must make best efforts to meet requirements. Making use of third-party providers to achieve these goals should not be looked upon more or less favourably than self-reliant efforts.”

“Some custodians will expand the range of collateral services they offer. And for self-clearing, roles could become more blurred as brokers may start to compete with custodians.”

And he says he anticipates new entrants in securities lending as the market expands. As demand for high-grade collateral increases, new sources will be keener to lend as the price becomes more attractive.

Pension funds and corporates with strong cash balances or other high-quality assets may look to benefit from potential increased returns. Central banks, which previously withdrew or pulled back their lending activity during the financial crisis, may also return to the market.