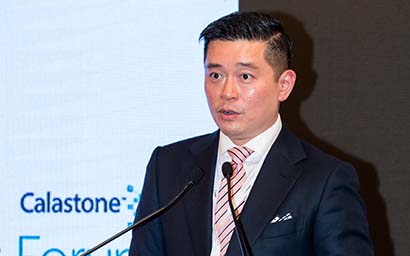 Funds Global Asia, in partnership with Calastone, presented the results of a survey of the funds industry to audiences in Hong Kong and Singapore. This was the second year running that Funds Global Asia carried out a large scale survey of the global funds business in partnership with financial technology firm Calastone. The presentation included an Asia-specific section as well as a summary of a global research project, which included 238 respondents. The results were presented at two events held in Hong Kong and Singapore and introduced by Leo Chen, head of Asia at Calastone (left page, top right). No passport?
The most eye-catching result of the Asia-specific survey section was the decline in confidence in regional passporting initiatives. Last year, the mutual recognition of funds (MRF) scheme between Hong Kong and mainland China was deemed the passporting scheme with the best chance of success by our Asian respondents. This year, the proportion who chose MRF fell to 29%. There was a similar collapse in confidence in the Asia Region Funds Passport, chosen by only 7% of respondents this year, and the ASEAN passport, which was chosen by 2%.
Instead of the home-grown fund passporting initiatives, respondents this year indicated Ucits as the scheme with the greatest chance of success. More than half (51%) chose Ucits, up from 27% last year. A European fund type, Ucits was not designed for Asia, but it has nevertheless become a de facto passport in the region. Our respondents thought the regional alternatives were poorly placed to supersede it. Super SAR
The next question asked respondents which country in Asia would be the most important for cross-border fund distribution. Again there was a clear result – Hong Kong was chosen by 62% of respondents, putting the territory far ahead of mainland China and Singapore, which were each chosen by 16% of respondents. Hong Kong was the most popular choice last year too, but this year its lead was dominant, suggesting the special administrative region (SAR)’s status as a fund distribution hub has solidified. The final Asia-specific question looked at the fund hubs of the future and asked respondents to say which of several emerging fund centres offered the most attractive market for Asian managers to grow their businesses. Again there was a clear winner: Indonesia. The 47% of respondents who chose this nation may have reasoned that its very large population made it appealing as a place for fund companies to raise assets. Regulation, technology
The main body of the survey was based on a global sample and looked at the intersection of regulation and technology. Among the notable findings were that 93% of respondents believed the amount of effort required to comply with regulations in the funds industry had gone up in the past year (of which 60% held the view strongly). When we attempted to quantify the pace of this change, we found that 47% of respondents believed regulatory costs at a typical asset manager had gone up between 0%-25% in the past year while 26% believed costs had gone up between 25%-50% in the same period. An important finding was that the majority of respondents believed there was an opportunity cost associated with regulation. In other words, a side-effect of regulatory compliance was underinvestment in other parts of the business. But what if this cost became free? We asked respondents what they would recommend asset managers to buy, if the money currently spent on compliance became available for other purposes. Two-thirds (67%) said technology. From this we conclude that there is an intimate relationship between regulation and technology investment. If regulatory costs could be reduced, technology investment ought to go up. Discussion
Each event also featured a range of experts on the funds business who shared their views on the issues faced by fund companies in Asia. In Hong Kong, Chi Lo, an economist at BNP Paribas Asset Management, gave an insightful presentation about economic growth in China in which he discussed the leadership style of president Xi Jinping and the challenges faced by a country that will soon be the world’s largest economy. The conference also included two panels in which participants gave their views on the survey findings and proposed solutions to some of the problems facing the funds market in Asia. To close the event, Dr Yang Lu, co-founder of Poincaré Capital Management, spoke about his experiences. A physicist by training, Lu had worked at CERN in Switzerland, home of the large hadron collider, before moving from the world of physics to finance, after which he became a hedge fund manager in California. He returned to his native China to work for the State Administration of Foreign Exchange before leaving that organisation to found his own firm, which he named after the French mathematician and scientist, Henri Poincaré. A similarly knowledgable roster of funds industry professionals graced the stage at the Singapore event to discuss issues such as consolidation in the funds industry, the burden of know-your-client/anti-money-laundering rules, and the challenge of maintaining positive performance in volatile markets. At each event, a representative of Calastone showed the audience the latest developments in the company’s blockchain-based service offering, which aims to improve the efficiency of the global funds market. ©2018 funds global asia