MAURITIUS TAX TREATY: The holiday is over 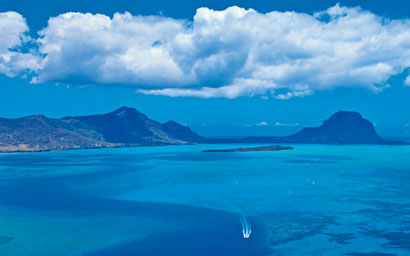 Mauritius, a tiny island nation, is the largest sender of foreign investment into India. But as Indrajit Basu reports, it is about to lose its tax advantages. After almost a decade of negotiations, India and Mauritius have rewritten their 33-year-old double taxation avoidance agreement. Unveiled on May 10, the new treaty will close the ‘Mauritius window’, which for years allowed foreign investors operating in the small island nation to invest in Indian shares without paying tax on capital gains. The Indian government says the new agreement will “tackle the long pending issues of treaty abuse and curb revenue loss”.  The treaty could have other good effects for the Indian tax service by helping to constrain a practice called ‘round-tripping’, in which Indian citizens use the Mauritius window to bring money back into the country that was taken out to evade taxes. The sums concerned are large. Although Mauritius is small – more than 25 Indian cities have a bigger population – it accounted for about a third of the $278 billion of foreign investment received by India between April 2000 and December 2015, according to the Indian government. 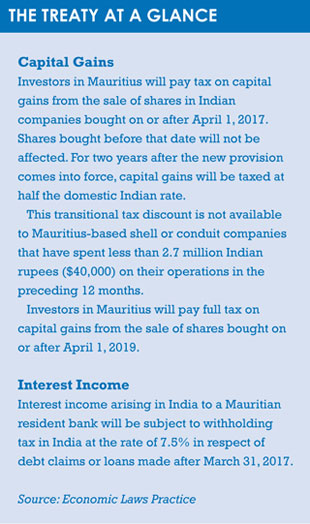 It’s no surprise, then, that the government has hailed the new treaty as a milestone. But how will the treaty affect those fund managers that have domiciled Indian equity funds in Mauritius to benefit from tax advantages? OUT OF FAVOUR
In one respect, the treaty’s effects will be limited. Whether an investor is onshore or offshore, India’s current policy is only to tax capital gains on shares held for less than one year. Capital gains on shares held for longer than a year will not be taxed, meaning long-term investors in Mauritius or anywhere will not be affected by the new treaty. Another reason to believe the new treaty will not spell disaster for fund managers is that a number of them, anticipating changes to the jurisdiction’s tax status, have already migrated away from Mauritius. Money invested from Mauritius accounted for a fifth of assets under custody in India in March 2016, according to the Securities and Exchange Board of India, a fall from 28% four years ago. “When we launched our latest fund last June, we took a conscious decision not to go via Mauritius because we were not expecting the tax holiday to last for long,” says the manager of an Indian equity fund, who spoke on condition of anonymity.  Some have welcomed the treaty because it clears the uncertainty that had affected Mauritian investors in recent years. “This is a very good step in the right direction because it removes the unpredictability around when the tax would be removed and how much would be taxed in Mauritius,” says Karun Marwah, director of international business at Motilal Oswal Financial Services, a Mumbai-based firm offering wealth and asset management. HEYDAY
Some argue that Mauritius was losing its edge as an offshore destination anyway. Its heyday could be seen as the 1990s, before India liberalised its economy, when capital gains tax in India was as high as 25% for short-term gains and 50% for long-term, says Nishith Desai, founder of law firm Nishith Desai Associates. At that time, he says, Mauritius helped foreign investors, especially Americans, cut their tax bills. “US investors in particular were facing the brunt of double taxation, because both [India and the US] were taxing the gains but the US was not providing tax credit for the tax paid in India. This is why Mauritius was interposed between India and the US.” India has lowered its capital gains tax since, meaning there is not as strong an incentive to operate from Mauritius as there was in the pre-liberalisation days. 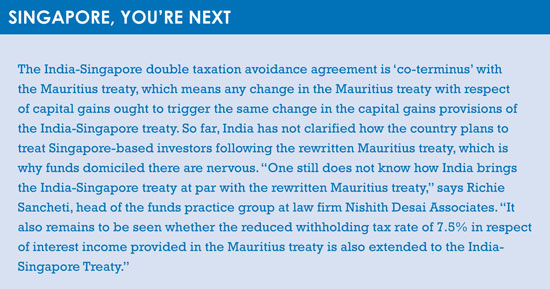 The treaty might anyway have been rendered irrelevant. According to Abhay Sharma, tax partner at law firm Shardul Amarchand, “all treaty tax benefits were in any event under threat because of GAAR that comes into effect on April 1, 2017”. GAAR, or the general anti avoidance rule, was designed by India in 2012 to scrutinise and tax transactions that the country believes are structured solely to avoid taxes. Jurisdictions such as Mauritius were in the spotlight for allegedly facilitating tax evasion. The effective date of GAAR is, coincidentally, the same date on which the capital gains provision of the new Indo-Mauritius tax treaty comes into force. NEXT STEPS
Given these factors, many fund managers expect relatively little impact from the new treaty. Indeed, some find reasons to celebrate, such as the treaty’s two-year transition period, in which qualifying investors will be taxed at half the Indian rate on capital gains. During this period, Mauritius will still be one of the cheapest jurisdictions from which to buy Indian shares, they say. 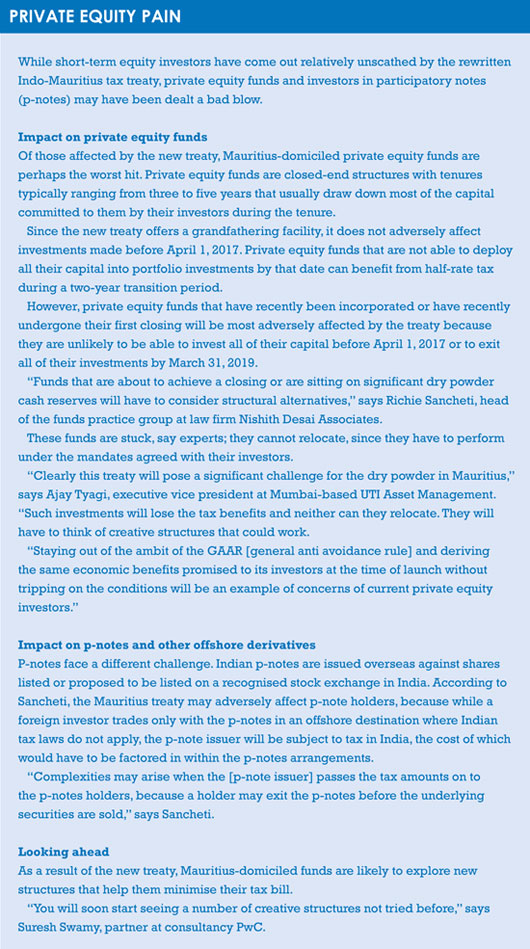 The island offers other advantages as well. “After all,” says Desai. “Mauritius is a mature and transparent offshore centre for foreign investors and has a well-drafted, bilateral treaty protecting investments compared to all similar treaties with all other countries.” The Indo-Mauritius treaty is one of the strongest in terms of providing non-discriminatory and preferential treatment to foreign investors, he adds. “No other bilateral treaty offers protection against nationalisation, repossession and expropriation.”  Supporters say Mauritius also boasts a population of finance professionals, a robust legal system and a well-developed infrastructure for financial services. Its operational costs are lower than those of other offshore jurisdictions. WIND BLOWS
That said, the wind is blowing against offshore financial centres, which have come under increased international scrutiny since the Panama Papers leak. India has already announced it will start Mauritius-like renegotiations with other jurisdictions. Singapore, which also has a double taxation avoidance agreement with India, and which accounted for 16% of foreign investment in India between April 2000 and December 2015, is top of the list. India has not yet announced how it plans to address the Singapore route following the reworked Mauritius treaty, but some fund managers there are nervous (see box 2). Perhaps the worst affected by the new Indo-Mauritius tax treaty are Mauritius-domiciled private equity funds that have cash reserves waiting to be invested. These funds are now stuck because they can’t move out, owing to their investment commitments to investors, and may bear the brunt of the new tax. Fund managers may have to find creative structures to get around the treaty (see box 3). MERITS
Yet despite the grumbles of those disadvantaged by the new treaty, many experts say the legislation was an astute move. Not only does it serve the government’s interests of increasing tax revenues and curbing tax abuse, but, through its grandfathering clause and the half-tax transition period, it appears to respect investors’ interests as well. According to Marwah of Motilal Oswal, “it also sends a clear signal about the government’s preference for inviting long-term money on the merits of India, and not just to save on taxation”. ©2016 funds global asia