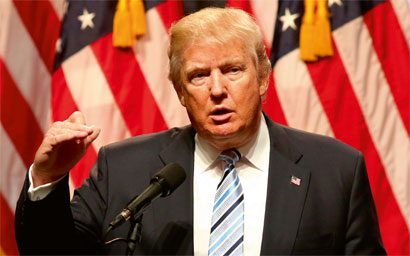 America’s president-elect wants to abandon trade pacts and declare China a currency manipulator. How much trouble will he cause in Asia? George Mitton reports. About an hour before the first votes came in, a representative of Hillary Clinton’s campaign was interviewed as part of the BBC’s US election coverage. Brimming with confidence, he told viewers that Clinton was sure to be installed in the White House. She had “far more paths to the presidency” than her opponent, who could only win thanks to some wildly implausible electoral upsets. Twelve hours later, that staff member was presumably no longer smiling as Donald Trump was declared president-elect. Rather like the Brexit referendum in the UK some months earlier, polling data had proved inaccurate. The impossible was possible: Trump would become the leader of the free world. Fund managers have struggled to work out what this divisive man means for Asian markets ever since. How long, and how dangerous, is Trump’s shadow? THE BAD NEWS
The immediate aftermath was not good. Emerging market equities sold off, giving back, in two days, half of what they had gained in the previous six months. “Yesterday’s correction was not expected in this magnitude and is a great frustration,” wrote Heinz Rüttimann, an analyst at Swiss private bank Julius Baer. Some analysts began to predict a gloomy future for America’s trading partners in Asia. Though Trump has not revealed many specific details, he has promised to abandon trade agreements such as the Trans-Pacific Partnership, a move that would deny a number of Asian countries the benefits of reduced tariffs on their imports to the US (see box). 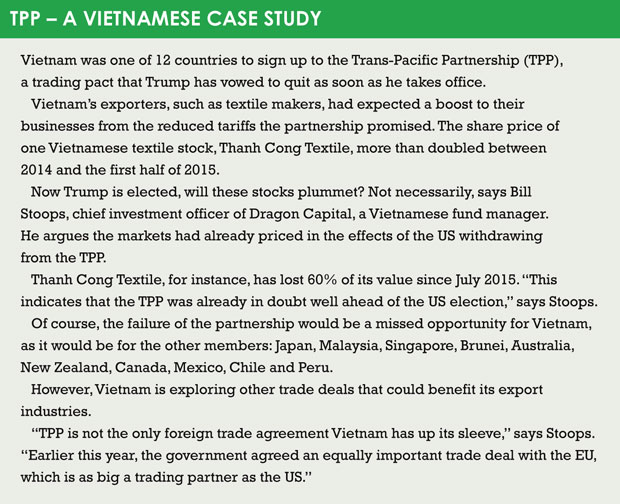 Trump has also indicated he will use economic policy to protect American industries, a trend to worry Asian countries that sell goods to Americans. His appointment of Dan DiMicco as trade adviser in the transition team implies a punchy approach. DiMicco, a former chief executive of America’s largest steel company, has written at length on his personal blog about how the US is involved in a trade war with China, which he has described as “the 8,000-pound gorilla when it comes to cheating”. “The Trump trade policy is both sound and necessary in today’s world where ‘trade cheating’ has become the norm,” he wrote in October. China, whose bilateral trade surplus with the US was worth 3% of its GDP in 2015, stands to suffer if Trump imposes punitive tariffs. Trump’s rhetoric also risks destabilising foreign exchange markets. His threats to label China a “currency manipulator” could introduce volatility in the renminbi. Put together, Trump’s policies on trade are so unsettling that Aidan Yao, an economist for Axa Investment Managers, declared them to be “unequivocally negative for Asia”. NOT SO BAD
In the month after the US election, equity markets performed better than critics predicted. The MSCI Emerging Markets index regained some of what it lost, ending November at the same level it had reached in July. With a more optimistic outlook in mind, some commentators suggested a Trump presidency could benefit Asia. His promises of infrastructure spending in the US might assist some Asian countries by increasing America’s demand for commodities and for specialist engineering skills, they said. Others were not worrying about Trump disrupting Asian economies because, they said, it was beyond his power to do so. “Trump could potentially declare China a currency manipulator and ask the IMF [International Monetary Fund] to keep an eye on the problem. However, there would be no concrete consequences to this,” says Andy Rothman, investment strategist at Matthews Asia. Indeed, China may be less vulnerable to changes in US trade policy than some observers think. The country is no longer an export-led economy. China exports only about a tenth of its manufacturing output by value, and less than a fifth of this goes to the US, according to data from Matthews Asia. Domestic consumption and services have made up the largest share of China’s GDP for five years now. Asia’s other great rising power, India, might suffer from US protectionist policies. Indian IT firms are wondering whether they will have to employ more workers onshore in the US to continue doing business with American firms. “The outlook for these companies is now clouded,” says Jonathan Schiessl, who manages an Indian equity fund for Ashburton Investments. However, as in China, Indian economic growth is primarily a result of domestic demand, which has little to do with the American president. AN UPSIDE?
Of course, for some, a Trump presidency is not something to be feared but celebrated. Brad Tank, chief investment officer for fixed income at Neuberger Berman, reckons Trump will be a more sensible president than his electioneering suggested. “Both political parties made many wild promises during the US election campaign – it’s called politics and it’s what people do when they want to get elected,” he says. For these optimists, Trump’s policies promise a return to the prosperous years of Ronald Reagan’s administration. In a globalised world, American prosperity ought to benefit Asian nations too. Other analysts point out that Trump’s promise to boost American production of shale oil and so-called ‘clean’ coal would benefit Asia, many of whose countries are energy importers. However, there are some less appealing possible outcomes. In terms of geopolitics, Trump’s suggestion that he will rein in American defence spending raises the spectre of regional instability. If Trump’s America is no longer happy to be the policeman of Asian seas, there may be a greater risk of war
over disputed territories such as the Spratly Islands, over which six Asian nations claim some ownership. Another worrying outcome would be if Asian nations were to hit back against Trump’s hostile policies, kicking off a tit-for-tat fight in which both sides end up worse off. “While protectionist policies could potentially harm the US economy, retaliation from trading partners could be an even more serious risk,” says Libby Cantrill, head of public policy, Pimco. “Trading partners could impose countervailing tariffs or retaliate in other ways; China, for instance, could sell its holdings of US Treasuries.” The truth is that it is hard to know what Trump’s policies will mean for Asia because his precise policies are still unclear. The president-elect has already appeared to backtrack on some of his campaign pledges concerning climate change. Perhaps he will abandon other unworkable policies such as his plan to build a wall to separate the US and Mexico. Such inconsistency would hardly be out of character for Donald Trump. His tendency to contradict himself, or to deny saying things which he is on record as having said, has infuriated the journalists who aim to hold him to account. It may be because he is so slippery that only two out of the hundred largest newspapers in the US endorsed him for the presidency, a number that is unprecedented in modern history for a candidate from a major political party. For Asia, and the world, a miasma of uncertainty surrounds the incoming US president. ©2016 funds global asia