INTERVIEW: The next chapter

Just over a year since his appointment to lead UTI Asset Management, Leo Puri talks to Stefanie Eschenbacher about his ambitions to capitalise on the relationship with its foreign stakeholder T. Rowe Price.

UTI Asset Management had been operating without a head since the previous chairman and managing director U.K. Sinha left back in February 2011 to become chairman of the Securities and Exchange Board of India.

Puri eventually joined from McKinsey & Co in August last year, and has made ambitious plans to offer a range of international funds to Indian investors.

“Given our relationship with T. Rowe Price, that is something we are likely to do reasonably soon,” Puri says.

Interest in India has been boosted by the election of reformist Narendra Modi of the Bharatiya Janata Party as new prime minister.

There are international funds in India, but volumes so far have been small. “The peak sales of offshore, dollar-denominated funds happened when the Indian rupee was falling sharply last year,” Puri says.

“Investing offshore is viewed as a currency hedge.”

UTI Asset Management already offers the Ucits-compliant, dollar-denominated UTI Indian Fixed Income Fund, however, Puri goes on to say that there are advanced plans for what would be the first Indian sovereign debt exchange-traded fund.

Seed funding from Bank of America has been tied up, and once approved it would be listed on the London Stock Exchange and the Singapore Exchange.

“We hope to launch this fund soon,” Puri says. “It would be an efficient way for investors to participate in India so long as they view that the current macroeconomic and currency stability holds.”

Despite rampant inflation and a currency slump that may dampen the appetite for Indian fixed income, Puri says it is still an attractive yield proposition. Indian ten-year sovereign bonds yield in excess of 8%. There may also be a gradual improvement of the access mechanism, as well as greater clarity on withholding tax for foreign portfolio investors.

LOOSENED RESTRICTIONS
The Securities and Exchange Board of India recently loosened restrictions on product launches, and Puri is looking to create a real estate investment trust.

“Real estate is an underdeveloped asset class,” Puri says. “We now have a number of cities with stable, mature and well-performing commercial assets, which could easily be put into a real estate investment trust structure.”

Assets are largely held in lower-margin fixed income products, and Puri says such an asset class would offer Indian investors diversification as well as more flexibility and liquidity than they would get if they pursued a property outright.

“We are already working on a product, but we need a bit more clarity when it comes to the tax treatment,” Puri says.

“What has typically happened in India is that investors have started to buy in at the peak and sold during times of volatility, and that is one of the reasons why they have suffered losses and lost confidence,” Puri adds.

UTI Asset Management has held up well in India, a challenging market in which only 18 out of 44 asset managers are profitable.

Research firm Cerulli Associates ranks it as the third-most profitable asset manager in the country, with net profits of 1.49 billion Indian rupee ($24.7 million) for the financial year 2013 and a market share of 9.5%. 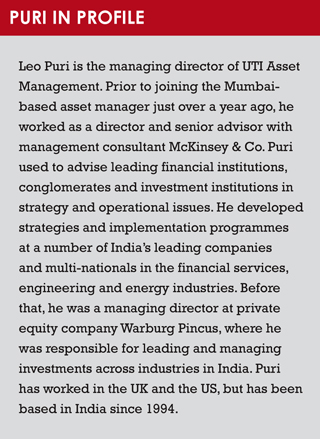 Compared to the previous financial year, net profits, asset under management and market share have increased significantly. This comes at a time where many peers are struggling for survival.

Even though UTI Asset Management is part of a financial conglomerate, Puri says it is the only pure-play asset manager in the top five – its competitors being parts of industrial conglomerates or banks.

“This gives us an advantage in terms of focus and independence,” he says. “We are not conflicted in any way how we run or govern ourselves, or how we make investment decisions, which is an important distinction.”

Puri says his goal is to regain pre-eminence in the asset management industry by delivering consistent investment performance and building new distribution channels.

Distribution has traditionally heavily relied on independent financial advisers, but Puri says this is broadened to include banks and wealth managers.

OLDER GENERATION
“We are also revitalising our brand, which is well regarded amongst the older generation, but clearly needs to be strengthened with regards to its reach and relevance with the younger, emerging affluent segment today.”

UTI Asset Management has built out online and mobile, and although Puri says adoption rates have been low, it was necessary to move with times. “Things could look completely different in five or ten years, so we are laying the ground work now.”