BUSINESS STRATEGY: Left out in the rain

Small quotas for the Chinese A-shares market, a short time to use them up, and tax uncertainty have left investors out in the rain. Stefanie Eschenbacher looks at the qualified foreign institutional investor programme, which has doubled in size.

China recently took what, at first sight, seems the most drastic step in opening up its capital account in decades.

It increased the size of its qualified foreign institutional investor (QFII) programme from $80 billion to $150 billion in July.

Though the headline number of the programme has almost doubled, those familiar with the technicalities say the pace of quota granting has actually slowed and the programme remains flawed.

Shanghai-based Eric Yan, head of QFII business at China International Fund Management, says the programme is too small, too slow and too inflexible.

Yan says between three and five QFII licenses are currently being granted by Chinese regulators, resulting in quota allocations of about $500 million per month.

QUESTION MARKS
This compares with an average of more than $1 billion per month last year, when a total of $15 billion was granted.

Yan says a large share of the quota was granted in the second part of last year; it gave investors confidence that the overall pace would accelerate further – which has not happened.

There are 230 QFII licence holders, a list compiled by Shanghai-based consultancy Z-Ben Advisors shows. Despite the new headline number of $150 billion for the QFII programme, only $43.5 billion have actually been used so far.

Looking beyond the numbers, the list also shows that the group of licence holders is becoming increasingly diverse.

Florence Yip, a tax partner at PwC in Hong Kong, and the firm’s Asia Pacific tax leader of asset management, says while it used to be mainly financial institutions from Europe and the US, today there are QFII licence holders all around the world.

She says there may be some time between an investors being granted a quota and then actually utilising it. “Some apply even if they still need to learn the rules and procedures, audit requirements, and so on. They also need to build a relationship with the custodian in China.”

With pension funds, sovereign wealth funds and other institutional investors served, Yan says that “now is the time to also accommodate lower-tier investors”.

There are still rules that exclude some active managers from the programme, such as hedge funds, which Yan says are perceived as the “bad boys”.

Yip, who is also vice chairman of the Alternative Investment Management Association in Hong Kong, says hedge funds do not feature high on the priority list of the regulator.

However, she points to the revised Securities Investment Funds Law. The law, which came into effect in June, covers everyone who advises and deals with funds investing in liquid shares.

“When QFII started a decade ago, the Chinese government was wise to focus on the larger institutional players first,” Yan says.

Today, the market is a lot more developed and, Yan argues, probably ready to accommodate hedge funds. “Hedge funds would not necessarily disturb the market, but would help to make it more efficient.”

Jelle Vervoorn, chief executive officer at HFT Investment Management (Hong Kong), says the expansion of the QFII programme is likely to result in a more diverse market and product offering.

“This is a clear sign that the Chinese regulators are interested in opening up the market, encouraging more investors to participate,” he says.

COMPLAINT
The announcement from the China Securities Regulatory Commission came just weeks after MSCI initiated the review of the country’s A-shares market for potential inclusion in the MSCI Emerging Markets index.

This is likely to trigger significant demand for China-related investments. 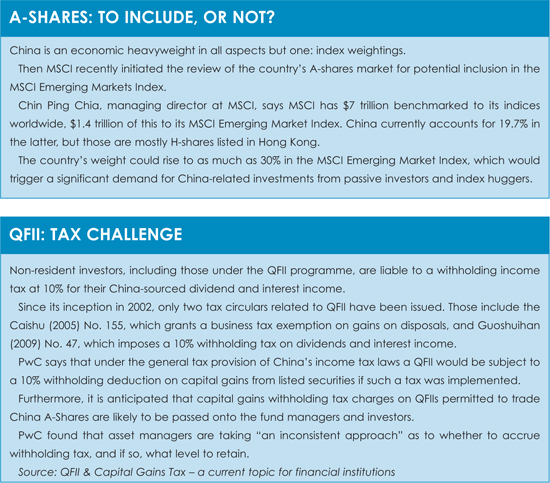 Already, one frequent complaint from quota license holders is that their quota is too small. “The biggest issue we have is the limit that has been put on each QFII,” Yan says, adding that $1 billion is simply not enough for large investors.

Asset managers will either have to invest in building a China capability, which is not economically viable for investments totalling $1 billion, or pay a third-party manager.

David Guo, head of China business at Schroders, says it takes asset managers years to build up a talent pool, register a product and market it to investors.

“On the operating side, if we get a QFII quota, we need to use it within six months,” he says. “If the market performance is poor, it will be a challenge to gather assets.”

Schroders has been granted a quota of $345 million, which is currently valued at $470 million because of market performance.

It should be in the regulator’s interest to award larger quotas to qualified investors and allow them more time to use it.

“It would benefit the Chinese economy because they would attract long-term investors, not speculators,” Guo adds.

He says he would like to see larger quotas for individual investors and a longer availability – five to ten years, rather than six months. “This would give us more confidence,” Guo says. “Then we could plan, build a team and develop various products.”

PLAIN VANILLA
Schroders is currently working with its joint venture partner, Bank of Communications, on China-related investments. Guo says his team also manages China investments on behalf of others, a part of the business he aims to grow as the number of participants in the QFII programme rises.

HFT Investment Management (Hong Kong) sub-manages the $500 million QFII quota of BNP Paribas Investment Partners, which has a market value of $3 billion and is only part of its total assets.

“We see a lot of institutional investors, like pension funds, that get a quota of between $150 million and $200 million, which is not a size that can be managed effectively inhouse,” Vervoorn says.

With the expansion of QFII, it seems likely that regulators will allow a greater variety of products in the future.

He adds that there is still demand for plain vanilla products, but he already offers more specialised investments: a small cap equity fund or theme-like funds investing in stocks related to infrastructure and consumption.

Like Guo, Vervoorn says he hopes to tap into the ever-growing pool of QFII quota. “For us to say we have enough quota would mean we have not searched enough or nobody
is out there,” he says. “China is a difficult country to invest in and unless investors have onshore capabilities, they will outsource.”

Another ongoing problem with the QFII programme has been the uncertainty around tax.

Non-resident investors, including those under the QFII programme, are liable to a withholding income tax at 10% for their China-sourced dividend and interest income.

Under the general tax provision of China’s income tax laws a QFII would be subject to a 10% withholding deduction on capital gains from listed securities if such a tax was implemented.

Furthermore, it is anticipated that capital gains withholding tax charges on QFIIs permitted to trade China A-Shares are likely to be passed onto fund managers and investors.

“It is something we would like to see improved,” Vervoorn says. “Most asset managers, including ourselves, are putting money aside in case we need to pay it.”

Asset managers have repeatedly approached various regulators in an attempt to pay the tax, but have been unable to do so.

“Even if an investor tries to pay the tax, there is no clarity over whether it is calculated from a net base, a gross base and from what date,” Yip says.

Though she says there has been at least one case where an institutional investor, which she declines to name, decided to redeem a significant sum and was then slapped with a tax bill.

“The idea is to create a level playing field with Chinese corporate investors that need to pay tax.”

Yip says investors who plan to redeem a larger sum should prepare themselves for having to pay the tax.

On top of that, some investors will also have to pay taxes in their home country. So the generally poor performance of the Chinese A-shares market led some investors to reconsider their investments, asking whether they would get higher returns elsewhere.

These taxes are by no means unique to China, and neither is the issue of potential double-taxation; it is the uncertainty and the administrative burden that bothers investors, not to mention the fact that provisions lie around idle.

Yip says it is not easy to collect this tax. The custodian needs to keep the transaction records, enabling the potential QFII tax to be computed. The fund administrator has to review the data and make necessary provisions after discussions with the fund manager

Rather than scrapping the tax, Yip says it is more likely it will be enforced in the future, considering the clamp down on tax avoidance by the G20 and the Organisation for Economic Co-operation and Development.

Paula Chan, managing director, fixed income, at Manulife Asset Management, says despite flaws in the QFII programme, the regulator has simplified the approval process and it is a lot less complicated today. “We have to give some credit to the regulator,” she says.

COMMITMENT
Chan also points to the recent expansion of the renminbi qualified foreign institutional investor (RQFII) programme into London, Singapore and Taiwan, and the fact that China has started to open up its interbank bond market to foreign investors.

“Following the liquidity squeeze in June, [the regulator] has shown even more of a commitment to make the financial sector stronger,” Chan says.

Investors are feeling left out in the rain with aspects such as tax, but with the recent decision by MSCI to review the A-shares market for potential inclusion in the MSCI

Emerging Market Index there are rays of sunshine.

The China Securities Regulatory Commission has not returned requests for comment.