INDONESIA: Fire beneath the surface

Indonesia aims to develop its financial sector through a regulatory overhaul while new players are entering the market. Stefanie Eschenbacher looks at the opportunities and the challenges.

Forecasted to be one of Asia’s fastest growing economies this year, Indonesia’s potential rivals that of China and India.

The Boston Consulting Group reportedly estimates that about 500,000 households in Indonesia have at least $100,000 in financial assets.

Household wealth grew by a staggering 20% to $630 billion in the course of last year. It is growing from a low base, but at a fast rate.

In May, Eastspring Investments, the asset management arm of Prudential Corporation Asia, announced plans to enter the Indonesian market.

Having been granted a license from Bapepam LK, the country’s capital market and financial institution supervisory agency, Eastspring Investments says it plans to develop a range of products to meet the needs of Indonesian investors. Its initial focus, however, will be on building a distribution network.

The Korean asset manager also says it plans to launch and manage various onshore funds in Indonesia. It is contemplating different strategies in Korea, such as Indonesian fixed income funds.

Despite the recent interest in Indonesia, the asset management sector remains small compared with other countries in Asia. Low levels of household wealth have limited the demand for investment products in the past. And wealthy Indonesians tend to hold their assets offshore, mainly in Singapore.

Past underperformance of non-bank financial sectors – pensions, mutual funds and other types of investments – had limited access to potential sources of long-term funding for infrastructure.

That was until the government placed infrastructure higher on its agenda.

The Economist Intelligence Unit predicts that the “high political priority” awarded to infrastructure development will lead to regulatory reforms aimed at unlocking the potential of the non-bank financial sector.

The Otoritas Jasa Keuangan is due to assume responsibility – a regulatory and supervisory mandate – at the beginning of next year.

There are, however, doubts as to whether this particular model is suitable. The British original is being abolished and its responsibilities separated, following its failures to monitor banks adequately in the build-up to the financial crisis.

Home bias
Indonesia’s recent moves to limit foreign shareholders in the mining sector to 49% and controversial bank-ownership rules that cap the single ownership of a bank at 40% have also led to accusations of protectionism.

The main challenge for asset managers remains distribution, which is mainly through banks, and restrictions on the types of products they can offer.

Local regulation prohibits domestic asset managers to offer their Indonesian clients anything other than an Indonesian strategy.

This means PT Schroder Investment Management Indonesia, the largest asset manager in the country, cannot offer its pan-Asian or global strategies in Indonesia. 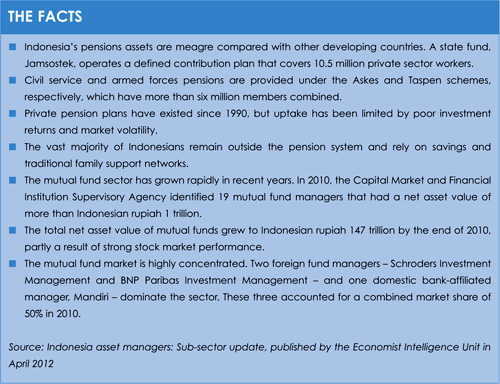 “Investors initially liked principal-protected funds that gave them a steady income and return,” says Secakusuma. “But with the current low-yield environment, investors are starting to shift to open-ended funds: equity funds, bond funds and balanced funds.”

Mutual fund laws allow a 15% investment overseas, but Tjoajadi says the few funds that have made such asset allocation calls have failed to gather assets.

“The most popular products are those that invest 100% of their portfolio in Indonesia,” he says. “Not many investments overseas give those types of high returns.”

“Should the limit on allocation to offshore instruments be loosened, we think this would provide a wider alternative for investor investment, thus potentially increasing local industry growth.”

Regional initiatives
Several countries in Southeast Asia are working on a regional fund passport scheme, scheduled for implementation in 2015.

“We know there is a discussion amid Southeast Asian countries to synchronise regulation, which would allow businesses to offer funds across the market,” says Tjoajadi.

Singapore and Malaysia had planned to sign the agreement – to create a cross-border stock exchange – in June, but delayed it. Thailand is expected to follow suit. If Indonesia joins it, funds of local fund managers would be freely tradable in Singapore, Malaysia and Thailand.

Conversely, a fund domiciled in Singapore would be available for sale in Indonesia.

“This would be good for us, but it would also mean more competition from other asset managers,” says Tjoajadi. “A lot of foreign asset managers that are competing are not established yet in Indonesia.”

Though some of the recent regulation may challenge asset managers, there have been some moves that present opportunities.

Indonesians redeeming money from their personal pension, for example, used to pay 25% tax on the redeemed amount.

More recently, this has been lowered to 5%. Pension regulators are now considering lowering this again to 3%.

“If this happens, pension funds will benefit because more money will flow into capital markets,” he says. “The future growth will be in Asia, including Indonesia. One of the challenges is to align our regulatory framework.”